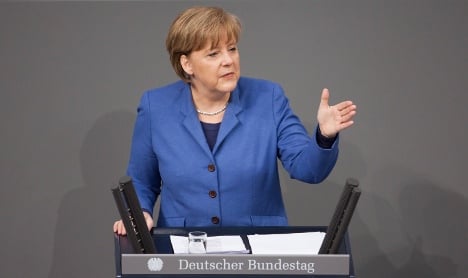 “If the seemingly impossible can happen in such a highly developed country like Japan, then the situation has changed,” she told the Bundestag in a speech loudly heckled by members of the left-wing opposition. “There’s a fundamental rule: When in doubt, opt for safety.”

Merkel on Monday decided to impose a three-month moratorium on her government’s unpopular decision last October to extend the lifespans of Germany’s nuclear power plants after an earthquake and tsunami caused a partial atomic meltdown in Japan.

“The catastrophe in Japan has an almost apocalyptic dimension,” she said. “We are at a loss for words.”

Seven out of 17 German reactors are scheduled to be mothballed during the moratorium, with several older models likely to be taken off the grid permanently.

The reversal comes just weeks before key state elections for her conservative Christian Democrats (CDU), exposing her to charges of hypocrisy and pandering to a German electorate that is highly sceptical of nuclear energy.

But Merkel denied her change of heart was a cynical grab for votes, telling the Bundestag she had not cut a deal with the nation’s big energy companies.

“This is a regulatory measure. This isn’t a deal, this isn’t an agreement, this is nothing,” she said, adding she still believed Germany needed time to replace nuclear plants with alternative energy sources. “We need a reasonable phaseout.”

“You’re trying to campaign by playing with people’s fears,” said Gabriel, who was environment minister in Merkel’s last coalition government.

He called for a return to the law that his party and the Greens passed while in power back in 2000, which would shut down all German reactors by 2020.

“How credible are you if you just do this (moratorium) for three months?” he asked rhetorically. “You always denied there was a real danger posed by these reactors. Do you even see your own contradictions?”

Meanwhile, two nuclear reactors affected by the moratorium in the southwestern state of Baden-Württemberg, Neckarwestheim I and Philippsburg I, were quietly shut down overnight by energy company EnBW.

But another German energy giant, E.ON, may take legal action against the government, the Süddeutsche Zeitung reported on Thursday.

E.ON operates two of the reactors to be shut down: Isar 1 in the southern state of Bavaria and Unterweser in Lower Saxony in the northwest. According to paper, E.ON lawyers are calling into question the legality of the forced closure, which was pushed through without a parliamentary decision.

Merkel’s decision has come as a bitter pill for the major energy companies in Europe’s top economy, E.ON, RWE, Vattenfall Europe and EnBW. Der Spiegel magazine has calculated that the three-month break could cost them a combined €500 million ($700 million).

And the political payout for Merkel might end up being negligible. A poll published by daily Bild on Thursday showed that an overwhelming majority of Germans thought the chancellor’s reversal on nuclear energy was insincere.

The survey, conducted by YouGov, showed that 81 percent of 1,122 respondents do not buy Merkel’s atomic flip-flop. Only 19 percent of participants viewed her administration’s change of course as “credible”.

But 70 percent still welcomed the government’s decision to shut down the oldest seven of Germany’s 17 nuclear reactors for at least three months. Less than a quarter of participants took issue with the decision.

In the case of an accelerated move away from nuclear energy, 74 percent of survey participants said they expected energy costs to rise, while 19 percent predicted prices would remain largely the same.