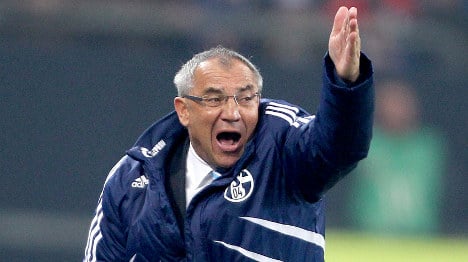 “We made revisions and found things are not as we need them to be,” said Schalke chairman Clemens Tönnies.

Having won the Bundesliga title with both Wolfsburg and Bayern Munich, Magath has been dismissed as both coach and manager with ex-Hoffenheim coach Ralf Rangnick reported to be favourite to take over. Magath’s assistant Seppo Eichkorn took training on Wednesday.

A breakdown in the relationship with his players – team members complained of Magath’s conduct to Toennies – and over-spending are said to be the reasons for Magath’s dismissal.

Tönnies refused to divulge the reasons behind the dismissal and said legal action was pending.

“From Schalke’s point of view, there are very good reasons for the separation,” he said. “We will not communicate them in the general public, because of possible

legal action. We are waiting calmly for this to happen.”

The Schalke chairman had heralded Magath’s arrival in 2009 when he joined the Royal Blues after guiding VfL Wolfsburg to the Bundesliga title, but nearly two years later much has changed.

“I have stood always stood by Felix Magath, even when the results weren’t good,” said Tönnies. “But then there came a key experience which turned me through 180 degrees.”

The 57-year-old Magath had been under a cloud since reports of his imminent dismissal broke in the German media last Wednesday, the same day his side reached the last eight of the Champions League by beating Valencia 3-1 at home.

But the Royal Blues have struggled in the Bundesliga this season, are 10th in the table and will discover their Champions League quarter-final opponents in Friday’s draw without a head coach.

Schalke play at second-placed Bayer Leverkusen on Sunday in the Bundesliga.