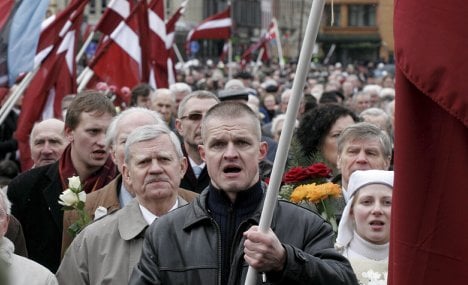 On Tuesday, a Riga court removed the city council’s ban on the “Legion Day,” allowing the veterans and their supporters to march through the city centre the next day.

They plan to commemorate the some 140,000 Latvian men who fought against the Russians with the German military.

Latvia was occupied by the Red Army in 1940, and many residents saw the Germans as liberators when they marched in one year later. A number of men subsequently volunteered or were conscripted into the Latvian Legion, an offshoot of the Waffen SS.

While the group, nationalist veterans’ organisation Daugavas Vanagi, says the march is simply a remembrance of those forced to wear the Nazi uniform, critics allege that it actually exalts the fascist forces.

“A brave Latvian leader must say to his people: These should not be heroes to a democratic member of the European Union,” director of the Simon Wiesenthal Center Efraim Zuroff told German news agency DPA.

A group of ethnic Russians also gathered in central Riga to protest the march, saying it dishonoured their fight against Nazi Germany, according to news agency AP.

A large number of police were also reportedly on hand to ensure the ceremony was conducted peacefully.