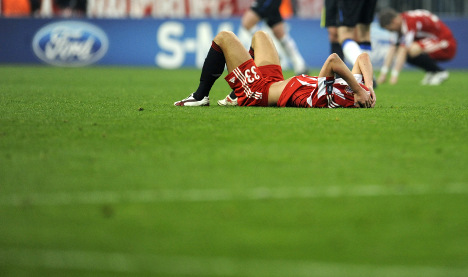 A late goal sealed Inter Milan’s 3-2 win in Munich on Tuesday night and put the title holders in the tournament’s quarter-finals.

Inter went through to the last eight after victory at Bayern’s Allianz Arena saw the Round of 16 tie finish 3-3 on aggregate which put the Italians through on the away-goals rule.

After Inter also beat Bayern 2-0 in last season’s Champions League final – then coached by Portuguese ‘special one’ Jose Mourinho – this was another bitter pill for the Germans to swallow.

Goals by Bayern’s Mario Gomez and Thomas Müller were cancelled out by Inter’s Samuel Eto’o and Wesley Sneijder before Goran Pandev scored the Italians’ crucial third in the 88th minute.

It was hard to take for Bayern, who at one stage led 3-1 on aggregate and squandered at least two clear chances to hit the back of the Italians’ net, leaving van Gaal furious with his team.

“We have already thrown away victory four or five times this season and we did it again today,” said the Dutchman.

“Although the opponent had fewer chances, they scored the goals. We had said in the half-time break that we had to remain compact, which we didn’t then do and made life hard for ourselves.”

After Bayern chairman Karl-Heinz Rummenigge told van Gaal ten days ago that his contract would be terminated at the end of the season, the Dutchman said he would not resign in the wake of the defeat.

“I will do everything I can to get the players out of this hole,” he said after last Saturday’s league win over Hamburg broke Bayern’s three-game losing streak which saw them dumped from the Bundesliga title race and German Cup.

While the outcome was all too familiar to van Gaal, his Inter counterpart Leonardo struggled to explain how his side’s fought back.

“I did not understand what happened tonight, I can’t even explain it,” said the Brazilian coach who took over after Spain’s Rafael Benitez was sacked in December.

“It was a great game between two teams who are amongst the best in the world. Bayern are a tough team to play, they control the ball and don’t let you play. They want to knock you down.”

Italian delight was tempered by the Germans’ bitter disappointment.

“We have played too passively and made too many mistakes at the end,” said a visibly disappointed Gomez.

“We didn’t finish our chances to counter-attack, you can’t do something like that against a team like that without being punished.”

Dutch winger Arjen Robben was just as stunned by the result.

“It is unbelievable, I don’t know how it came to this,” said Robben.