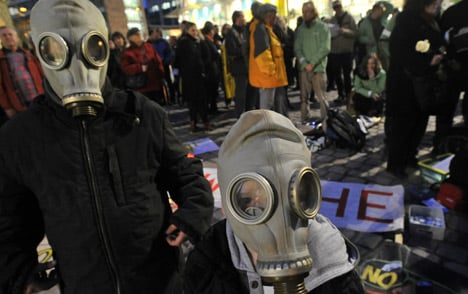 No official figure on the turnout was available.

Demonstrations took place in more than 450 towns and cities, according to the anti-nuclear organisation “Ausgestrahlt” (Irradiated).

“It is the first time in the history of the movement against nuclear power plants that so many people have mobilized in so short a time to demonstrate,” movement spokesman Jochen Stay said.

The group had announced the protests on the internet and Stay said organizers were surprised at the response.

Demonstrators held signs that said: “Solidarity with Japan – end nuclear power” and “Harrisburg 1979, Chernobyl 1986, Fukushima 2011 – when will we finally understand?”

On Saturday tens of thousands of people formed a human chain in southwestern Germany between the nuclear power station at Neckarwestheim and Stuttgart, capital of Baden-Württemberg.

The event had been planned long in advance to demand the closure of the plant, one of the oldest in the country.