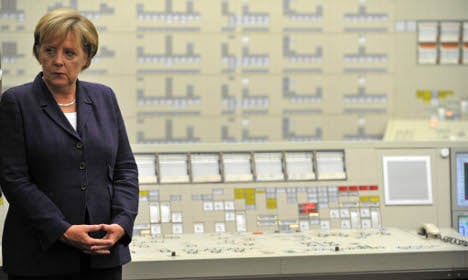 “Everything will be reviewed,” Merkel told reporters at a press conference in Berlin to announce the moratorium.

“If a highly developed country like Japan, with high safety standards and norms, cannot prevent the consequences for nuclear power of an earthquake and a tsunami, then this has consequences for the whole world,” Merkel said.

She added the review could lead to some of the country’s older reactors being soon taken permanently off the grid.

“This changes the situation, including in Germany. We have a new situation, and this situation must be thoroughly analysed.”

Members of her centre-right coalition had earlier in the day suggested the possibility of reversing a controversial decision made only last October.

Environment Minister Norbert Röttgen, a member of Merkel’s own conservative Christian Democrats (CDU), encouraged a renewed political discussion without taboos to reach a “national consensus” on the matter.

“We must speak comprehensively about safety, because we’ve had a completely new experience,” Röttgen said. “It also has consequences for the German situation.”

Polls show the majority of Germans consistently oppose nuclear power, and less than two weeks before a critical state election in Baden-Württemberg, the issue is set to figure highly as the nuclear disaster continues to unfold in Japan.

Both environmentalists and the opposition have pressed Merkel to reconsider her decision last autumn to push through a bill extending the lifetime of 17 German reactors by up to 14 years.

Her government had said Europe’s biggest economy needed time to develop renewable energy sources and could not meet its energy needs in the coming years without nuclear power. But Germany’s left-wing opposition disagrees with that assessment.

“We have to realise that the era of not only cheap oil but also of nuclear power is over,” Sigmar Gabriel, head of the centre-left Social Democrats (SPD), told the Süddeutsche Zeitung on Monday.

He said that although Germany was not in a seismic zone like Japan, which is battling to control two overheating reactors after Friday’s quake and tsunami knocked out cooling systems, Germany’s reactors were still at risk.

“In the current debate people are making the mistake of seeing the earthquake as the problem. The problem is the cut in power,” Gabriel said told public broadcaster ARD.

In 2000 Gabriel’s party, which led the nation under a coalition with the environmentalist Greens, decided to switch off the last of Germany’s nuclear power stations by 2020, but Merkel’s subsequent government postponed the exit until the mid-2030s despite strong public disapproval.

Green party co-leader Claudia Roth told broadcaster Bayerische Rundfunk that no reactor, including those in Germany, are completely protected from a meltdown.

“And that has nothing to do with earthquakes,” she said.

On Saturday tens of thousands of protestors – 60,000 according to organisers – formed a 45-kilometre human chain between the Neckarwestheim power plant and the city of Stuttgart.

Both are in the southwestern state of Baden-Württemberg, where Merkel’s CDU is in danger of losing power after 58 years in charge on March 27 in the most important of seven state elections this year.