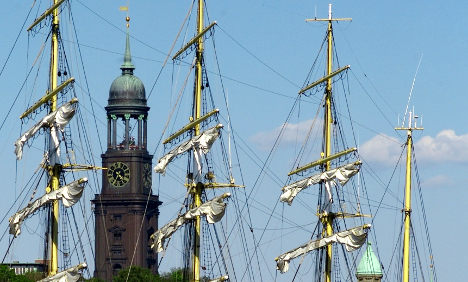 Dedicated on March 14, 1661, the Baroque St. Michaelis Church, known affectionately as the Michel, has become a well-known navigational reference point for sailors entering the northern German port city, not to mention a symbol of its resilience throughout history.

Tradition says sailors should always take one last look at the tower before they leave the harbour.

“The Michel is the cultural highlight of the northern Elbe River region and a identification symbol for everyone, not just Christians,” Mathias Benckert, spokesperson for the region’s Protestant and Lutheran churches, told news agency DPA.

Named after the archangel Michael, a bronze statue of whom is perched above its entryway, the church’s history actually began in 1600.

As the plague ravaged the Hanseatic League city, a cemetery was build outside the city walls in an area that now lies in the city’s Neustadt district. Soon residents built a chapel named after St. Michael there.

But church officials decided it was too small and commissioned the construction of a bigger church of the same name, and the still tower-less house of worship was dedicated in 1661. The now 132-metre tower was completed eight years later.

A lightning strike sparked a fire that burned the church to the ground for the first time in March 1750, after which the “Small Michel” chapel just 200 metres away served as a replacement until the larger church was rebuilt some 24 years later in 1786.

Residents managed to spare the church from being used as a stable during French occupation in the early 1800s, a fate that befell a number of other Hamburg sanctuaries. Twelve members of the church made the required 300 stalls available to the French instead.

Then in 1906 another fire caused by construction on the copper roof destroyed the Michel, killing a tower watchman. But just one day later church members pledged to rebuild their beloved church true to the original.

The Michel managed to make it through almost all of World War II without being destroyed, but shortly before the end of the conflict it was destroyed by Allied bombs.

It wasn’t until October 19, 1952 that the restored church was dedicated once again.

Since then the city has invested some €13 million in renovations. The 27-year restoration was completed in 2009, and the Michel now welcomes some 1.2 million visitors each year.

It also hosts a quirky service for an annual motorcycle parade in Hamburg, which draws bikers from around Germany.

“We are trying to see the tourism aspect as not just something that helps our community financially,” pastor Martin Illert told news agency DAPD.

“Instead we also enjoy speaking with the tourists and bringing them something spiritual, through our midday prayers, for example.”