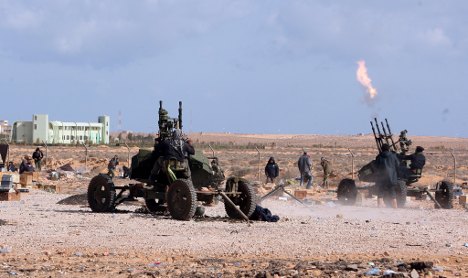 France became the first country to recognise Libya’s opposition as its rightful representatives, pledging to send an ambassador to rebel-held territory rocked by violence, officials said.

But the unilateral decision – made ahead of an EU summit on the issue set for Friday – was met with displeasure within the governing coalition, media reports said.

The question of Berlin following France’s lead “has not arisen,” a high-ranking government source said on Thursday.

“You do not recognise a government, you recognise a state,” the source said under condition of anonymity. “The question of recognising a rebel council is not relevant in terms of international law,” added the official.

Berlin recognises Libya’s national transition council “as someone who speaks for some parts of the population,” he added.

Earlier on Thursday, state minister for the Foreign Ministry Werner Hoyer told the Frankfurter Rundschau daily that “the situation is still too confused to be able to decide how to proceed.”

Even if the current government is “discredited,” it is “still not clear” how a transition government would work, he said.

The sanctions, applied Wednesday, also targeted the Libya Africa Investment Portfolio and the Libyan Foreign Bank, the ministry said, adding: “The measures block billions worth of assets” without specifying the currency.

clear reaction to the developments in Libya.”

He said the brutal suppression of the Libyan freedom movement could no longer be financed by assets held in German banks.

“The German government is sending a clear signal with this move that it is firmly on the side of those in Libya who are demanding freedom, democracy and the rule of law,” added Brüderle.

On Tuesday, the 27 nations of the EU decided to impose tough new sanctions on the regime of Libyan strongman Muammar Qaddafi, notably on the LIA, the overseas investment vehicle for Tripoli’s oil revenues.

Set up in 2006, the LIA has significant holdings in Italian bank UniCredit, Italian defence and aeronautical group Finmeccanica, Juventus Football Club and Pearson, the publisher of the Financial Times, which itself froze that holding last week.

The German move comes ahead of a frantic 48-hour period of European diplomacy as countries ponder how to deal with the continuing unrest in Libya.

Foreign ministers and leaders were set to meet over consecutive days for talks that will shape the prospects for military intervention via a no-fly zone, as well as humanitarian aid and economic props.