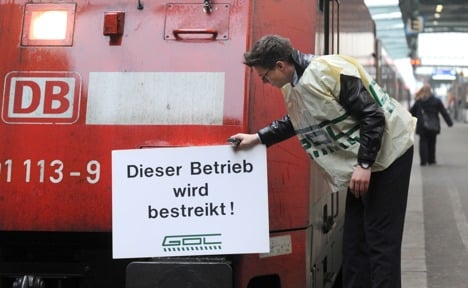 The strike over pay and working conditions was due to begin on freight rail lines at 8:00 pm on Wednesday, to be followed by industrial action against passenger train routes around the country from 4:00 am on Thursday lasting until 10:00 am, the GDL train drivers’ union announced.

The union hopes the strike will push national rail operator Deutsche Bahn and its private competitors to “put an offer on the table at last that can be the basis for talks,” GDL boss Claus Weselsky said on Wedesday.

Following a series of warning strikes in recent days, more than 90 percent of members voted for an unlimited stoppage on Monday.

At the weekend, the German Chambers of Industry and Commerce (DIHK) said that an extended strike by train drivers could have serious consequences for the booming German economy.

“Many industries depend on ‘just-in-time’ production,” said Wansleben. “It would only take a few days for strikes in rail-freight transport to cause production disruptions, because cancelled train consignments can often not be immediately re-routed via road or domestic ship.”

Wansleben was responding to a warning from the GDL that they wanted to concentrate the strikes on freight lines so as to not inconvenience train travelers.

Deutsche Bahn will refund tickets of those affected by the strike without charge and has set up a toll free number for passengers: 08000 99 66 33