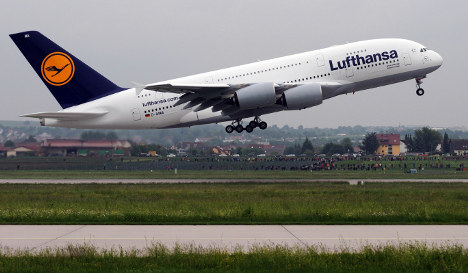 Lufthansa, which also owns the carriers Swiss, Austrian Airlines and BMI, said it benefitted last year from an exceptional tax gain worth around €400 million.

That caught analysts polled by Dow Jones Newswires off guard, as they had forecast a net profit of around €600 million.

“On the basis of this gratifying result,” Lufthansa directors will propose a dividend of €0.60 per share, the statement said.

Lufthansa did not pay a dividend in 2009 owing to its net loss.

“The results are good and even better than expected,” said Jürgen Pieper, an analyst at Bankhaus Metzler who had expected an operating profit of around €850 million and a dividend of €0.25.

Full details of the group’s results are to be published on March 17.

Shares in the German airline showed a strong gain of 3.32 percent to €15.11 in afternoon trading on the Frankfurt stock exchange while the DAX index on which they are listed was 0.28 percent higher overall.

Last year, the Lufthansa group carried 90 million passengers, a gain of 17 percent from 2009.

This year could be tougher, however, because high oil prices will cut airline industry profits by nearly half despite the growth in air travel, the International Air Transport Association said on March 2.

In a revised profit forecast, IATA said it was downgrading its airline industry profit outlook for 2011 to $8.6 billion from the $9.1 billion it estimated in December.

“The biggest shift in our forecast is the price of oil,” IATA director general Giovanni Bisignani said.

“Profits will be cut in half compared to last year and margins are a pathetic 1.4 percent,” he added.