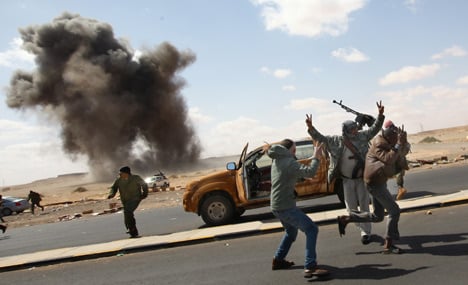 “If crimes against humanity are conclusively proven, I call for the establishment of no-fly zone over Libya to protect the civil population there,” Burkhardt Müller-Sönksen, a member of the parliamentary defence committee for the Free Democrats, told the daily Bild.

However, he and Henning Otte, a defence policy point man for Chancellor Angela Merkel’s conservative Christian Democrats , both said imposing a no-fly zone should be done only within the framework of a United Nations mandate.

On the other side of the political spectrum, support is also growing. Centre-left Social Democratic political spokesman Rainer Arnold said a no-fly zone might be necessary, but warned of possible consequences.

“A no-fly zone is good, but imposing one could set off a military conflict that might cause more harm than good,” he said.

For the Greens, a no-fly zone is a reasonable tool to use in response to the ongoing violence in Libya, but it should be used only if the United Nations Security Council, the Arab League and the African Union have all agreed to it.

“Only then would an intervention not be seen as a western attack on Islam,” said Omid Nouripour, a Green Party member of the defence committee.

Foreign Minister Guido Westerwelle, leader of the Free Democrats, has called for a careful consideration of a no-fly zone, although he told the Wednesday edition of the Straubinger Tagblatt that he rejected imposing a flight ban without a UN mandate.

He said Germany must be careful not to be drawn into a military conflict.