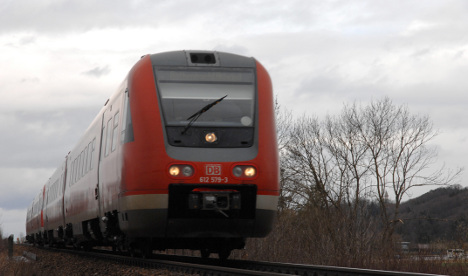 The 19-year-old mother, Ulrike Kracht, stepped out of the train on Friday at the Pritzwalk station with her stroller, but when she turned to lift her daughter Marie-Luise off the train, the doors quickly shut and the train rolled away, daily Berliner Zeitung reported on Sunday.

“They are usually open much longer,” Kracht said of the doors, explaining that she often disembarks from trains that way without problems.

Two bystanders witnessed the unhappy separation and ran alongside the train, banging on windows in hopes of alerting Deutsche Bahn personnel, but to no avail.

When Kracht frantically approached a Deutsche Bahn employee on the platform, she was allegedly told: “We can’t stop longer, we must stick to the schedule.”

The 45 minutes that she was separated from her daughter were the longest of her life, Kracht told the paper.

It remains unclear why the doors closed so quickly, and why the train travelled through another seven stations before stopping.

Kracht informed police, who arranged for a conductor on the train to care for the toddler and followed the train through northern Brandenburg in a patrol car in attempt to retrieve her.

But the regional train, which only halts at passenger request, did not stop, even in Wittstock, where a police car was already waiting, the paper said.

Little Marie-Luise was finally picked up in Neuruppin.

The mother and daughter were apparently victims of the railway’s strained resources following another strike by train drivers on Friday morning, Berliner Zeitung wrote.

“It is very aggravating that Deutsche Bahn isn’t in a position to solve such a problem on their own,” a police officer said.

“It’s more than realistic to say that the train could have stopped near the station,” she told the paper, adding that it would have cost 15 minutes at most.

If conductors had explained the situation to passengers, the delay would have been easily forgiven, she said.

Deutsche Bahn has undertaken an investigation into the incident and CEO Rüdiger Grube apologized personally to the woman.

The company has made headlines for similar incidents several times in recent years.

In January 2010, a conductor was disciplined for throwing a 16-year-old girl off a train on the coldest night of the year for having the wrong ticket fare.

As a result of two similar incidents in 2008, the rail company instituted a new rule forbidding employees from forcing children from their trains.

In October of that year, a conductor forced a 12-year-old girl on her way to cello lessons to get off a train at dusk in a remote rural area because she forgot her ticket. She was forced to walk five kilometres with her instrument despite protests from adult passengers who offered to buy her ticket and complained that it was irresponsible to leave her alone so far away from home.

In November 2008, a 13-year-old was forced off a train in Wittstock for forgetting her train fare with no way to contact her family for help.