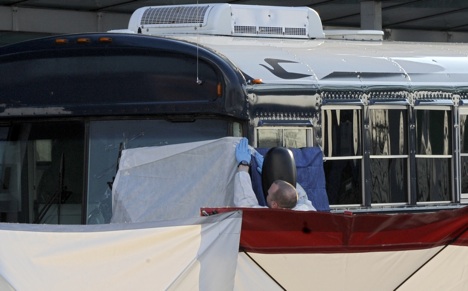 An anonymous source from within security services apparently told Die Welt newspaper that there were security failings at the airport. The German Attorney General would not comment on the story.

“This mishap could have had dramatic consequences if the shooter had got away,” said CDU interior policy spokesman Wolfgang Bosbach. His SPD counterpart Dieter Wiefelspütz added, “One has to question whether the security of the US soldiers at the airport was properly organized.”

Armed with a Belgian Fabrique Nationale semi-automatic pistol and a large quantity of ammunition, a 21-year-old Kosovar named Arid Uka attacked a bus used to transport US military personnel outside the airport terminal last Wednesday.

He shot dead one US airman in front of the bus before also killing the driver. Two other servicemen were seriously injured.

He then fled into the terminal building before being subdued and arrested. The man admitted early on during his interrogation that he wanted to kill US soldiers. Working at the airport’s international postal centre, Uka knew his way around the facility, and likely observed the US military bus service beforehand.