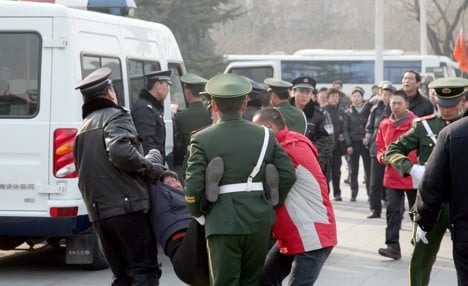 Around a hundred people took to the streets in China’s most populous city following an internet appeal for “Jasmine protests” across the country like those seen in the Arab world in the past weeks.

A massive security presence in Shanghai, Beijing and several other cities prevented further demonstrations, while a group of over a dozen foreign journalists were detained. The Stern reporter, Janis Vougioukas, was let go after three hours.

Foreign Minister Guido Westerwelle described the detainment of the journalists as “very disturbing,” because China had been repeatedly called on to allow foreign correspondents to report freely.

“The continued obstruction of the work of journalists is unacceptable and damages the reputation of the People’s Republic of China in the worldwide media,” said Westerwelle.

Security forces secured two huge shopping streets in Beijing, not far from the Great Hall of the People, where the National People’s Congress is currently being held. Metro stations in the area were temporarily closed, and there were reports that mobile phone signals had been jammed.

State security officials have also followed several German journalists who had been warned against going to the large shopping streets.