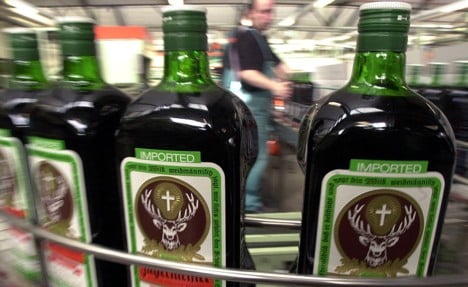 Günter Mast, who died last week of heart failure aged 84, turned the herbal liqueur, a secret mixture of 56 different fruits, roots and herbs, from an acquired taste and a winter warmer for German hunters into a global phenomenon.

Its slightly medicinal tang, viscous texture and powerful kick has propelled the potent brown potion to number eight on the list of the top 100 spirits according to Impact International.

Last year, 85 million squat green bottles of the stuff were sold, doubtless leaving many times that number with sore heads.

Hailed in the German press as a “marketing genius”, Jägermeister’s current boss, Paolo Dell’Antonio described Mast as “without question one of the top businessmen our country has ever produced.”

Due in large part to Mast’s innovative advertising flair, the firm went from a small liqueur manufacturer in the town of Wolfenbuettel in central Germany, to a global drinks giant present in more than 80 countries.

But he didn’t just transform the company, he was also a trailblazer in the field of sports advertising.

Mast’s masterstroke was in the invention of football shirt advertising. In 1973, he clinched what is widely accepted to be the world’s first strip deal with his local club, Eintracht Braunschweig.

A good four years before such advertising kicked off in England, Eintracht Braunschweig were proudly sporting Jägermeister’s “stag’s head with beaming cross” logo on their shirts, starting a trend that endures in most sports.

The German football league opposed the controversial move but other clubs followed suit and it rapidly became common practice. The club did, however, refuse Mast’s wish to rename them “Eintracht Jägermeister.”

Mast himself described the sponsorship experiment as his “finest advertising gag” in 46 years at the firm but was not himself a massive football fan despite his indelible connection with the game’s history.

“I know when the ball goes into the goal, but I couldn’t explain the offside rule to you,” he said in a press interview to mark his 80th birthday.

His other celebrated advertising campaign came in the form of a series of around 3,000 slogans beginning “I drink Jägermeister because …”, posters of which became collectors’ items in Germany and beyond.

The most infamous of these was one showing a pre-teen girl clutching a glass and the classic green bottle with the slogan “I drink Jägermeister because … my dealer has been banged up.”

Mast left the firm in 1997 but his pioneering legacy lives on, said Jens Janetzki from marketing consultancy firm Team Vinco, which has studied Jägermeister’s advertising success.

“They have always been a very innovative company and they still are,” said Janetzki, noting recent advertising campaigns in discos and gigs that have captured a new market.

“Jägermeister has very skilfully turned itself from being a drink for old people to targeting a younger generation,” Janetzki told AFP.

The drink has taken off especially in the United States, where it has overtaken Germany in terms of sales, according to the firm. Particularly popular are “Jägermeister lounges”, another successful advertising gimmick.

Often enjoyed with a mixer, downed neat or used as a “bomb” – in a shot glass submerged in another glass, often of beer – Jaegermeister has proved especially loved by students.

Mast, an ardent hunter – the name Jägermeister in German means huntsman – leaves behind three children from his first marriage.