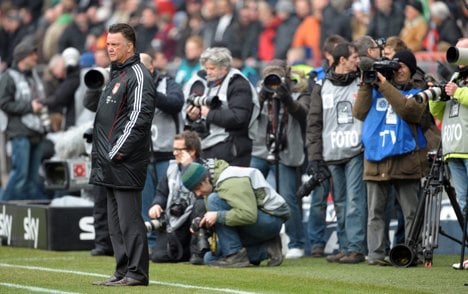 Van Gaal had already indicated that defeat to Hannover could cost him his job but prevaricating when asked afterwards about his future, saying only: “I am not in a position to answer this question.”

“I have always had the support of my board. They decide whether to withdraw this support, not me.”

The chairman of that board, Karl-Heinz Rummenigge, said the result and the manner of the defeat was “the low point of the season” but said he would not take a knee-jerk reaction.

“Of course we are all disappointed, but I think we have all been around long enough to know that after such a game, you need to have a night’s sleep before you consider what to do.”

To add insult to injury, Bayern were forced to play the last 18 minutes with 10 men after Brazilian defender Breno saw red for lashing out petulantly after losing the ball.

The home side took the lead on 16 minutes, as Norwegian striker Mohammed Abdellaoue latched on to an inch-perfect cross from Konstantin Rausch after a break down the left and lashed it past a helpless Thomas Kraft.

Bayern looked woefully short on confidence and barely threatened the Hannover goal in the first half, a scuffed and easily saved Arjen Robben free-kick summing up their fortunes.

And whatever van Gaal said at half-time, it had little effect as the defending champions found themselves two down after 51 minutes.

Rausch again was the architect of Bayern’s downfall, drilling a piledriver of a shot towards the Bayern goal that took a slight deflection off the head of the luckless Gomez.

Bayern hit back almost instantly through their star combination of Robben and French midfielder Franck Ribery. After a goalmouth scramble, the Frenchman lifted a cross over the defence for Robben to head home.

But midfielder Sergio Pinto sealed Bayern’s fate with a 30-yard shot on 62 minutes that Kraft failed to gather, the ball evading his grasp and dribbling into the net.

Before the Hanover game, the German giants had endured a torrid few weeks in which their dreams of repeating last season’s league and cup double were cruelly smashed.

First they suffered the humiliation of losing 3-1 at home to Dortmund, then four days later, they were dumped out of the German Cup thanks to a 1-0 semi-final defeat to Schalke.

Hugely off the pace in the league, their hopes of salvaging the season lie in securing second place as well as in the Champions League itself where they hold a 1-0 lead over Inter Milan.

Meanwhile, Dortmund took a huge step towards their first Bundesliga crown since 2002 with a 1-0 win over Cologne on Friday night.

Poland striker Robert Lewandowski’s 44th-minute strike proved enough to give Jürgen Klopp’s side their 19th win of the season from 25 games as they cruise towards the title.

Bayer Leverkusen, who apparently dropped former Germany captain Michael Ballack despite an injury crisis in midfield, lead the chasing pack, their 3-0 hammering of VfL Wolfsburg closing the gap to 12 points.

At the other end of the table, the two bottom clubs both won, VfB Stuttgart beating ten-man Schalke 1-0 and bottom side Borussia Mönchengladbach giving themselves some hope with a 2-0 win over mid-table Hoffenheim.

The relegation dogfight between Eintracht Frankfurt and Kaiserslautern, delayed after crowd violence, ended 0-0.

Meanwhile, four goals by German striker Christian Eigler was enough to secure three points for Nuremberg in their mid-table clash with St. Pauli.