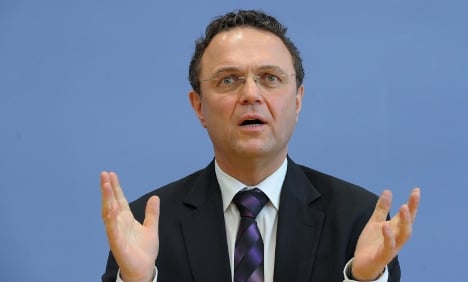 During his first public appearance as interior minister on Thursday, Friedrich responded to questions by reporters about the shooting of two US airmen in Frankfurt by an alleged Islamist with an inflammatory statement.

He said Muslims living in Germany were part of society, “but that Islam belongs in Germany is something that has no historical foundation.”

“Of course Islam belongs in Germany,” she said. “I assume that the new interior minister, along with his predecessors such as Thomas de Maizière, takes the responsibility for integration in his department seriously and is committed to solidarity and not marginalization.”

“Neither the denial of this fact, nor the glorification of a naive and romantic multiculturalism helps us along,” he added.

FDP integration policy expert Serkan Tören recommended that the Justice Ministry take over the Islam conference from the Interior Ministry in light of Friedrich’s sentiments.

Meanwhile a chorus of opposition politicians lambasted Friedrich, among them centre-left Social Democrat Dieter Wiefelspütz who characterized his statement as “rubbish.”

Friedrich’s comment mirrored similar comments he made last autumn amid a rancorous debate over whether Muslim immigrants are capable of integrating into German society.

The debate was sparked by former Bundesbank board member Thilo Sarrazin, who made a number of anti-immigrant statements aimed mainly at Turks and Arabs, coinciding with the publication of his controversial book Deutschland schafft sich ab – Wie wir unser Land aufs Spiel setzen, or “Abolishing Germany – How we’re putting our country at jeopardy.”

On Friday a spokesperson for Friedrich attempted to soothe tempers, saying that Islam was a reality in Germany.

“That does not stand in opposition to the fact that Germany and German culture are above all characterized by the Christian religion and will remain so in the future,“ the spokesman said.

This week Friedrich was named as former Interior Minister Thomas de Maizière’s successor after he took over the Defence Ministry for the disgraced Karl-Theodor zu Guttenberg, who resigned on Tuesday.

The government’s Islam conference was initiated by former Interior Minister Wolfgang Schäuble in 2006 as an attempt to open a healthier dialogue with some four million Muslims living in Germany.