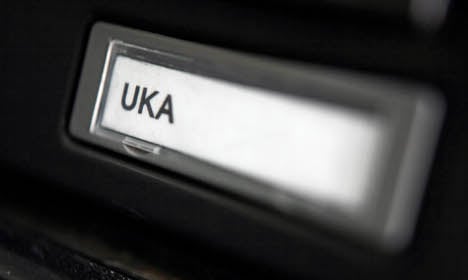 Arid Uka, a 21-year-old suspected Islamic radical born in Kosovo but raised in Frankfurt, has admitted to shooting dead two US servicemen at the city’s airport on Wednesday.

Investigators have begun studying a page on social networking website Facebook believed to belong to the suspect on which he made no secret of his radical leanings and connections to Germany’s Islamist scene.

A top German lawmaker called Friday for the expulsion of “hate preachers” in the wake of the shooting.

“Religious freedom does not mean the freedom to do anything you like,” Wolfgang Bosbach, the parliamentary interior policy spokesman for Chancellor Angela Merkel’s conservative Christian Democrats (CDU), told the regional daily the Neue Osnabrücker Zeitung.

“Only via a massively increased police presence on the internet can the emergence of hate preachers or messages from Islamists be discovered in time,” he told the paper. “If it is technically possible, internet sites from the Islamist scene must be blocked.”

Newspapers in The Local’s media roundup on Friday grappled with the causes and repercussions of a senseless act.

The Leipziger Volkszeitung said the shooting had changed the quality of the threat of Islamist terrorism.

“The security authorities could not hinder an Islamist attack in Germany that cost human lives,” the regional daily wrote. “However, it wasn’t al-Qaida or another terrorist organisation behind it, but rather someone acting alone. Of course, there will never be complete protection from disturbed attackers, but there must be consequences in light of this new kind of perpetrator. Otherwise there’s only helplessness.”

The Kölner Stadt-Anzeiger also focused on the fact that Uka was not part of a terrorist network like al-Qaida.

“It’s enough when a crazy person slips through the cracks,” the Cologne-based paper wrote. “That shouldn’t cause us to break out in panic. But carefree indifference was, is and will remain equally unjustified.”

Frankfurter Rundschau expressed relief that Frankfurt had not been targeted by al-Qaida, however, the left-wing daily was also dismayed a city resident had turned to terrorism.

“There was no terror organization behind Arid Uka. This realization is both calming and unsettling at the same time,” the paper wrote, arguing a strike by al-Qaida could have inflicted far more damage. “But the attack shows how powerless the security authorities really are. Everyone has grown accustom to seeing police officers with bulletproof vests and machine guns. But even they couldn’t stop Arid Uka.”

The centrist daily Der Tagesspiegel said the incident should cause Germans to look hard at their society.

“Questioning the societal atmosphere allowing someone like Arid Uka and other ‘holy warriors’ to become consumed by deadly illusions is unavoidable,” wrote the Berlin paper. “Although the majority of society is far removed from the terror fantasies of jihadists, it can’t be ruled out that common anti-American resentments have provided fertile ground for the hatred of extremists – whether they are Islamists, neo-Nazis or anti-imperialistic leftists.”

The right-wing daily Die Welt said Germany’s authorities could not be blamed for not preventing the shooting.

“Who can reproach security officials? It appears Arid Uka was a complete unknown,” the paper wrote. “Early indications point to the young Kosovar spending most of his free time playing violent video games on his computer. One of them was ‘Black Ops’ which entails killing as many soldiers as possible.”

The paper said it would therefore be unwise to think religious extremism was the only cause of the attack.

“Around the world, most Muslims are distancing themselves from violence and terror. The peaceful revolutions in the Egypt and Tunisia have underscored the Muslim wish for freedom and democracy. Their victory was the greatest defeat of terror.”