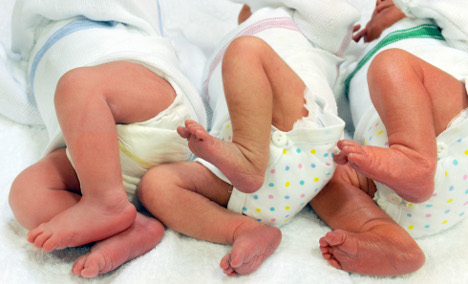 The Wiesbaden-based GfdS compiled the 2010 list using a survey of over 330 birth registries across Germany, accounting for about 536,000 names, or just over 50 percent of all German births in 2010.

As part of its language consulting services, the GfdS also dealt with over 3,000 cases in which parents had trouble getting their babies’ names registered. These were, in most cases, names that were gender neutral or of foreign origin.

While civil registry officials are generally loath to bend strict rules on names that don’t properly reflect a baby’s gender, have unconventional spellings, or could lead to future humiliation, some unusual names were still successfully registered in 2010.

But others were rejected, such as Leuis, Gihanna, Pfefferminza, Cheraldine, Partizan, Laslo (for a girl), Idjen (rather than Etienne), Menez, Junge (“Boy”) and Puppe (“Doll”).

On the whole, there was little change in the top names between 2009 and 2010. Only Hannah/Hanna and Luis/Louis were new to the top 10.

Marie, with the exception of 2008 the most popular girl name every year since 1999, trailed Sophie/Sofie by a slim margin, with both names tallying just under 10,000 registrations.

The gap between these top two girls’ names and the rest of the top 10 was significant, while a slim margin separated names like Emma from Hanna/Hannah and Lukas/Lucas from Luca/Luka.

A breakdown of compound names (such as Karl-Heinz) was not conducted, partially because most name registries do not keep official records of middle names, but also because of a law stating that middle names, like nicknames, can be modified at will.

The most popular names of 2010 are listed below (rankings from 2009 in parentheses).