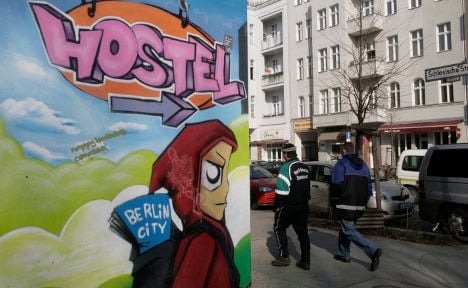 “Help, the tourists are coming” was the name of a gathering organized recently by the Green party in Kreuzburg. The turnout was good – over 120 people squeezed into a hall to talk about what they should do about the tourists who many long-time residents say are ruining the neighbourhood.

The bogeymen in their eyes have a profile: They are young and hail from England, Sweden, or maybe Italy. In the morning they rattle sleeping residents out of their beds as they drag trolley suitcases over the cobblestones on their way to catch an early Ryanair flight. At night, they disturb the peace with loutish, alcohol-fuelled behaviour, littering the sidewalks with broken beer bottles and vomit.

“We’re not a zoo,” said one young man in low-hanging jeans and a hoodie. “Tourists need to head over to Alex or Kudamm,” he added, referring to Alexanderplatz and Kurfürstendamm, two areas which have traditionally been main tourist magnets in the German capital.

But things are changing. The one-time alternative neighbourhood was once best known for its squats, drop-outs, punks and immigrants, not to mention the annual May Day demonstrations where leftists square off against police. But Kreuzberg is now firmly on the itinerary of many tourists, alongside the Brandenburg Gate and the TV Tower. With its many bars and clubs, hip reputation and cheap prices for accommodation and beer, Kreuzberg has become a prime destination for the low-cost-airline set.

“I’ve lived in Kreuzberg for 20 years,” was a refrain often heard at the meeting, although it was hard to know whether people were angrier about the neighbourhood losing some of its gritty edge or at the techno blasting away in the all-night, open-air clubs along the Spree River. Indeed, some of the complaints by the self-styled “alternative” crowd were reminiscent of the objections voiced by Swabian villagers upset at local punk shows in the 1980s.

Kreuzberg is not alone in its concerns about the changes that the city’s tourism boom has wrought. In other central districts such as Mitte, Prenzlauer Berg and Friedrichshain, new hotels seem to be opening up all the time – many aimed at the EasyJet crowd.

There is also a thriving black-market hotel sector, which has the Berlin government concerned. Those are apartments that are regularly rented out by the day, week or month to young tourists or foreign students. The practice, while illegal because the owners lack the proper permits, is very popular.

“Berlin has become the capital of the holiday rental,” according to Burkhard Kieker, head of the city marketing agency, who said the trend pushes rents up and makes apartments scarce.

But the situation is unlikely to change any time soon, especially as Berlin keeps breaking its own record for tourist visits each year. In 2010, according to the city’s tourist office, there were more than 21 million overnight stays and the total number of visitors topped 9 million, an increase of 9.5 percent over 2009. There are currently 112,000 hotel beds in the city; another 15,000 are planned.

Near Kreuzberg, on the northern side of the Spree, Germany’s biggest youth hostel is being built and developers have requested permits for additional hotels in the area. The district of Kreuzberg-Friedrichshain recorded 1.1 million visitors last year, an 8 percent increase over 2009.

“City policy has simply been overwhelmed by all the development,” admitted Gerhard Buchholz from the city’s tourist board.

But city authorities aren’t likely to discourage tourists from going to Kreuzberg or any other neighbourhood, despite complaints from locals. Berlin Mayor Klaus Wowereit is a big backer of the city’s tourism sector, since industry-poor Berlin has few other sources of revenue. Tourism adds about €9 billion to city coffers every year.

According to marketing chief Kieker, the Kreuzberg protests are overwrought and residents should be proud rather than annoyed that visitors from all over Europe come to experience something of the lives Kreuzbergers get to live every day. The neighbourhood has become a central part of Berlin, he said, instead of remaining the niche place it used to be.

But it appears that for many long-term residents, living in that niche was just fine.