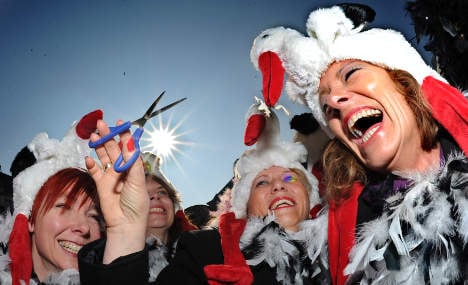 According to the tradition of Weiberfastnacht, or the “Wenches Carnival,” hoards of women in the largely Catholic region descend on city halls to snip off men’s ties to show them who’s really boss.

Always on the Thursday before Ash Wednesday, the day is also known as Fat Thursday, when men generally wear old ties in anticipation of losing this symbol of their manhood, a humiliation that is also traditionally soothed with a kiss.

In Düsseldorf the women traditionally stage the mock arrest of the city’s mayor, while in Cologne the triumvirate of presiding fools, or Dreigestirn, takes hold of the keys to the city.

Brilliant sunshine on Thursday warmed thousands of costumed revellers known as Narren in Cologne’s streets, where the year’s most popular outfits appeared to be disco queens and hippies.

Other costumes at the now largely secular festival included food items, such as French fries, broccoli, carrots, or bags of crisps.

“Is there a costume festival going on here or what,” jolly 47-year-old participant Oliver Albrecht joked with reporters.

But one 13-year-old called Leon said he disapproved of his mother’s costume, shaking his head and saying, “You’re all just sick.”

However, far away from the Rhineland in the mainly protestant state of Mecklenburg-Western Pomerania, considered to be “unKarnevalable,” it was all business on Thursday.

When asked if the Rostock city hall had also been stormed by costumed ladies a spokesperson replied: “We do serious things here and none of that nonsense.”