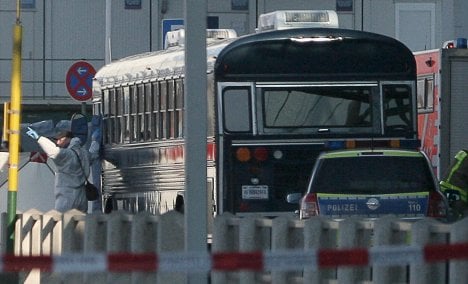 Police spokesman Jürgen Linker said the incident occurred at Terminal 2 on a bus used to transport US military personnel. The bus driver and one member of the US Air Force were reportedly killed.

“Two airmen have been killed and two were wounded during a shooting incident today at Frankfurt International Airport,” US Air Forces Europe said in a statement.

The victims had just flown in from Britain and were about to travel to Ramstein airbase near Frankfurt, German police said.

Chancellor Angela Merkel expressed her condolences to the friends and families of the deceased. “This is a horrible event,” she told reporters in Berlin.

The shooting came a month after Germany’s authorities had announced that additional security measures imposed late last year in response to indications of an imminent “terrorist” attack were set to be gradually scaled back.

The police initially said they believed there was an altercation near the bus before the shooting occurred around 3:20 pm and there was no clear indication that it was an act of terrorism. However, by Wednesday evening evidence was mounting that it could have been a targeted attack against US forces.

The authorities said a 21-year-old suspect from Kosovo living in Frankfurt had been overpowered after fleeing into the terminal building.

Boris Rhein, interior minister for the state of Hesse, said the man had apparently approached the bus and shot a US solider standing in front of the vehicle before killing the driver in his seat. He said the motive for the shooting remained unknown.

“I am consciously speaking of homicide and not an attack,” said Rhein at the scene of the shooting. “But at the moment nothing can be ruled out.”

The suspect used a handgun, Rhein said, while media reports said that the man also had a knife. There was no exchange of fire aboard the bus.

Another police spokesman said that those injured were taken to a civilian hospital, but he was unable to say if they were in a critical condition.

US President Barack Obama, in a surprise appearance in the White House briefing room, said that the US government would “spare no effort” to find out the circumstances of the attack.

“We will be working with German authorities to ensure that all the perpetrators are brought to justice,” Obama said, describing the shooting a “stark reminder” of the sacrifices US service members serving abroad made.

The US military has a number of major bases near Frankfurt, including Ramstein, which are used as hubs for operations in Afghanistan and Iraq.