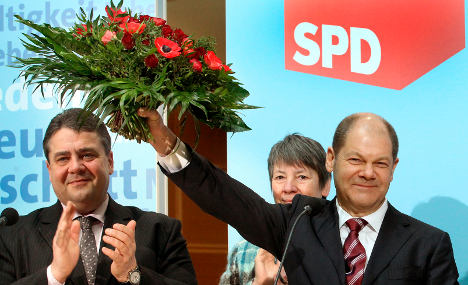 The SPD jumped four percentage points to reach a 27 percent approval rating – their best rating since September 2010 – according to a survey by pollster Forsa for news magazine Stern.

Though the Greens fell two points to 16 percent – their worst poll result since June 2010 – the environmentalist party could still theoretically team up with the SPD to beat the ruling centre-right coalition of Merkel’s conservatives and the pro-business Free Democrats (FDP).

Forsa head Manfred Güllner told Stern that the recent victory for Hamburg SPD candidate Olaf Scholz had brought many of the party’s former voters back.

Scholz led the SPD to win an impressive 50 percent of the vote in the city state last month, compared with just 20 percent for Merkel’s CDU.

The ongoing plagiarism scandal involving Karl-Theodor zu Guttenberg, who resigned from his post as Defence Minister on Tuesday over the affair, has also turned some voters on to the SPD, Güllner speculated.

“Even when many objected to a resignation by the defence minister, the affair still led to irritation and shock among their supporters,” he said.

The improving popularity of the SPD could have devastating effects on Merkel’s party in a “super election year,” with another six state elections to come.

The poll conducted by the Forsa research institute surveyed 2,503 representative German citizens between February 21 and 25.