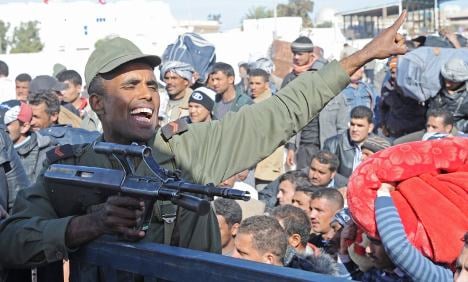 A file photo of protests in Libya. Photo: DPA

“We must do all we can to end this killing, for example by not allowing the dictator fresh money to hire foreign soldiers,” Westerwelle told journalists during a special meeting of the UN Human Rights Council.

“The latest idea under discussion is to freeze all payments to Libya for 60 days,” he said.

Germany, France and Italy are the main importers of oil from Libya.

Westerwelle welcomed what he called “the unity of the international community” in backing “clear, concrete and strong sanctions.”

Speaking later at the Human Rights Council, the German foreign minister said he expected the EU to agree on “robust sanctions.”