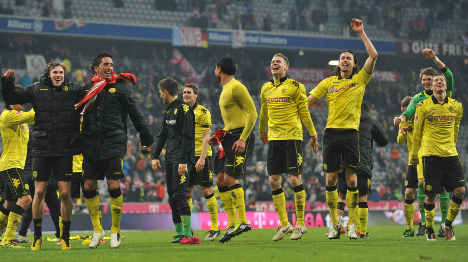 Australian goalkeeper Mitchell Langerak earned his coach’s praise with an impressive debut for Dortmund during in their 3-1 win at Bayern Munich on Saturday.

The defeat means Bayern are 16 points off the pace and, with 10 games left, Borussia are on course for their first German league title since 2002.

Dortmund’s young team – their average age is just 22.3 – proved their status as Bundesliga winners-in-waiting with their second win over Munich this season.

A knee injury to Borussia’s captain and goalkeeper Roman Weidenfeller during last week’s training had handed 22-year-old Langerak his German league debut in front of a sell-out 66,000 crowd, having joined Dortmund last July.

“I am pleased for the boys. Mitch Langerak protected the winning margin for us and, all things told, did a magnificent job,” said Klopp.

“Most of my players were still being nursed the last time we won in Munich!”

Langerak was only beaten when the Dortmund defence left Luiz Gustavo unmarked and the Brazilian volleyed home on 15 minutes, but the Australian took his chance to impress after 25 games on the bench.

“They then defended well and their goalkeeper denied (Mario) Gomez a chance with a fantastic save.

With Dortmund set to face strugglers Cologne in the Bundesliga on Friday, Langerak will keep his place between the posts if Weidenfeller fails to recover from his injury.