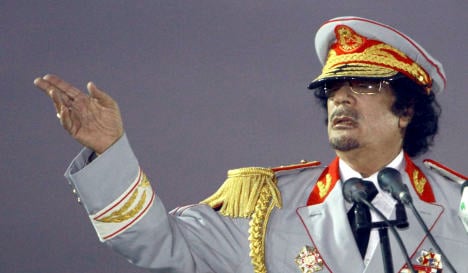 “The unanimous decision of the UN Security Council is a strong signal to Colonel Qaddafi and other despots that abuses of human rights will not remain unpunished,” she said on Sunday in Berlin.

Merkel called on Qaddafi to step down, saying the unanimous vote of the UN demonstrated the determination of the international community in its condemnation of Qaddafis crimes in attacking protesters.

She spoke after 133 Germans and other Europeans were evacuated from southern Libya on Saturday night. It is thought around 100 more Germans are still in the country and efforts are being made to help them leave.

The sanctions against the Libyan regime include a travel ban on Qaddafi and his clan as well as the freezing of all his and his associates’ foreign bank accounts. The wheels were also set in motion for investigations to begin into the Libyan regime with a view to prosecutions for systematic abuse of human rights at the International Criminal Court at the Hague.

A group of Libyan opposition politicians have founded what they are calling a temporary government headed by former Justice Minister Mustafa Mohammed Abd al-Jalil. It was recognised as legitimate overnight by the Libyan ambassador to the US, Ali Audshali.

The Libyan deputy ambassador to the UN Ibrahim Dabbashi called on army officers to split from Qaddafi and defend their own people instead. He said at least 2,000 people had been killed during the violence against demonstrators.

Although Qaddafi’s militia still largely controls the capital Tripoli, it has lost power in several other areas and at least two other cities.

Thousands of foreign workers are being evacuated from Libya in ferries and planes.