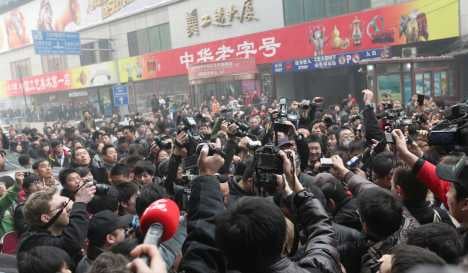 Camera teams from the state broadcasters ARD and ZDF and a reporter from the news agency DPA were arrested in Wangfujing, the main shopping street in Beijing, after an appeal was launched on the internet calling for protests there.

The appeal called upon people to take to the streets in Beijing and several other cities to protest, or simply go for a walk on a specific street at a particular time.

ARD correspondent Christine Adelhardt and her film team were reportedly bullied into a building by a group of up to 20 security officers, and shoved into a police van. They were taken away for questioning, accused of breaking rules which forbid filming in the area.

The ZDF team with correspondent Johannes Hano was filming on the other side of the street when they were also arrested by more than 10 uniformed men – shortly after a police officer gave them permission to film. The police demanded the film be erased, which Hano refused to do.

The DPA reporter was also arrested but released soon afterwards, the police telling him he had no permit to report from the area and he should leave.

Other foreign correspondents were also arrested. Adelhardt and her team were released after a few hours of questioning and lecturing. The ZDF team was still being held at lunchtime on Sunday.