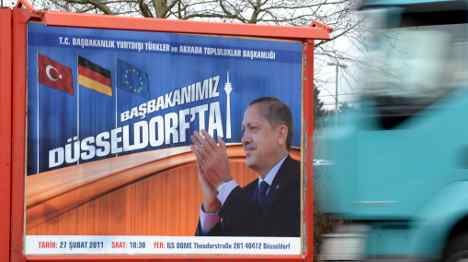 “The expectation of the Turkish population is that Germany, as previously under earlier CDU governments, take a leading role within the EU regarding the entry negotiations with Turkey,” Erdogan told Saturday’s edition of the Rheinische Post.

Chancellor Angela Merkel’s Christian Democratic Union (CDU) has most recently proposed a “privileged partnership” between Turkey and the European Union, something Erdogan rejects, and suggested was only a construct for domestic consumption.

“I understand it as a formulation which is only considered for domestic use,” he said.

The entry negotiations were being slowed down due to purely political considerations, he added.

Erdogan is due to address thousands of people on Sunday in the Düsseldorf ISS Dome – the majority attending are expected to be Turks or people of Turkish heritage. Local police are preparing for protests.

He is then expected to open the computer trade fair CeBIT, at which Turkey is this year’s partner country, with Merkel in Hannover – after having met former Chancellor Gerhard Schröder.

Schröder said this weekend Turkey should no longer be offered the privileged partnership, which he told the Hannoversche Allgemeine Zeitung had no substance. Germany should behave as a lawyer acting in Turkey’s interests – out of its own interests, considering that Germany is Turkey’s biggest trade partner, he said.

Erdogan also criticised German integration policies, saying they took no notice of the wishes of the Turkish people concerned.

“I think successful integration requires the German authorities to no longer deal only one-sidedly, but rather to aim for cooperation with Turkish migrants, Turkish civil organisations and the Turkish government,” he said.