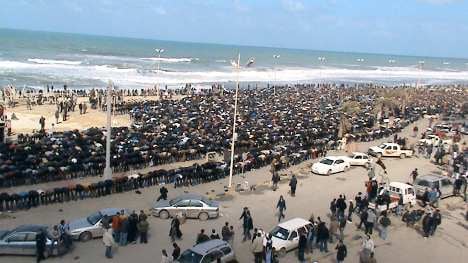 The two leaders believe “the United Nations Security Council must adopt severe sanctions as quickly as possible against the regime in Tripoli,” he said, adding that the two leaders also agreed on the need for European Union sanctions.

The UN Security Council is set to meet again on Saturday to consider a sanctions resolution against Libyan ruler Muammar Qaddafi in a bid to halt his bloody crackdown against opposition protesters.

Britain, France, Germany and the United States have drawn up a resolution which says the attacks on civilians could amount to crimes against humanity.

It calls for an arms embargo and a travel ban and assets freeze against Qaddafi and his entourage.

Thousands of foreigners are doing their best to get out of Libya, for fear of escalating violence, while Qaddafi is said to be arming civilian supporters, having lost control of much of the country.