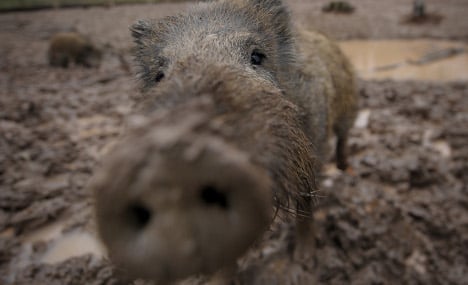 Little remains of the closely cropped English lawn, and unearthed gravestones are tumbled about the grounds, which are the final resting place of British Commonwealth aircrew and prisoners of war who died in the Berlin area during both world wars.

“We couldn’t believe our eyes at first,” Fontaine said.

In his estimation, about one-quarter of the 38,000-square-metre graveyard has been destroyed.

The wild hogs already damaged some of the grounds last year, but when gardeners informed the city’s wildlife control hunters, they were informed that it is illegal to shoot guns in cemeteries.

“It’s only authorized in an emergency,” he said.

But Berlin wildlife officials plan to target the boars outside the cemetery, guessing that the porcine pillagers reside in the nearby Grunewald forest.

According to forester Marc Franusch, there are some 8,000 boars living in the Berlin area, with numbers increasing by some 300 each year. Around 1,500 are shot each year, he estimated.

But the wild boars venture into the city more often than ever before, attracted by a “comfortable life and a richly filled plate,” Franusch said.

To prevent further damage to the soldiers’ cemetery, gardeners have doubled the height of their fences and fortify the entry.

“It won’t be cheap, but it can’t be avoided,” Philippe said.

The War Graves Commission Cemetery is one of two in Berlin. Some 3,576 Commonwealth soldiers are buried inside.