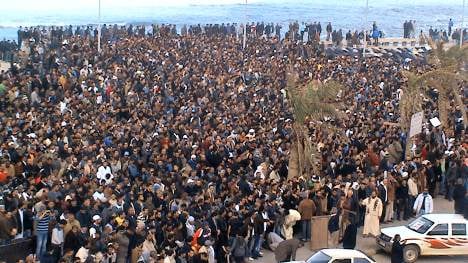 The issue was not about setting time limits for Libyan leader Muammar Qaddafi, but about “acting now,” he added.

Possible sanctions could include banning entry into the country for Qaddafi’s family, or freezing their assets, Westerwelle suggested.

But it is still too early to discuss the possibility of economic sanctions, he said.

“We want to affect the ruling family, not the people,” he told the broadcaster.

A united position among world leaders will be crucial for finding a solution, he said.

Meanwhile US President Barack Obama had reportedly called leaders in France, the UK and Italy on Thursday night to discuss possible measures against Qaddafi as his forces continue to brutalize those people, who have taken to the streets calling for a regime change.

Bizarre behaviour from Qaddafi continued on Thursday night, when the leader blamed the revolt on Al-Qaida in a television appearance, saying that young people had been given drugs to foment the revolt.

On Thursday Germany sent three warships toward Libya to help evacuate German citizens from the crisis-hit country, where violence continued to intensify.

Germany has recommended all its nationals leave.

The ships are headed for the Gulf of Sidra, an arm of the Mediterranean that forms a wide bay on Libya’s coast east of Tripoli.

There are some 600 troops on the three ships, the Defence Ministry said, which had originally sailed from Wilhelmshaven on February 15 toward the Mediterranean on a routine training mission.

Berlin did not reveal the details of any possible naval rescue mission. “There are no concrete plans,” a Foreign Ministry spokesperson said.

As more towns in the east come under opposition control and Qaddafi’s forces work to strengthen their control in the capital, desperate Libyans and frightened foreigners have been pouring out of the country by any means possible.

There are an estimated 160 German nationals still in Libya, 50 of which are thought to be in the capital Tripoli.

Flag carrier Lufthansa announced on Thursday the cancellation of its daily flight to Libya until at least Monday due to the worsening security situation there.

Lufthansa normally flies to the capital Tripoli once a day from its hub in Frankfurt, but has brought “between 600 and 700 people” back to Germany in the past week using larger planes than usual, a spokesman for the company said.