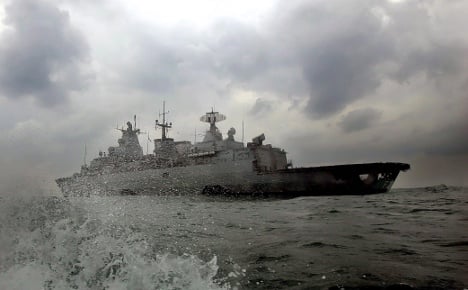 A spokesman for the Defence Ministry said the frigates “Brandenburg” and “Rheinland-Pfalz” and the tactical support ship “Berlin” should reach their destination in a few days. They are headed for the Gulf of Sidra, an arm of the Mediterranean that forms a wide bay on Libya’s coast east of Tripoli.

There are some 600 troops on the three ships, the ministry said, which had originally sailed from Wilhelmshaven on Feb. 15 toward the Mediterranean on a routine training mission.

Berlin did not reveal the details of any possible naval rescue mission. “There are no concrete plans,” a Foreign Ministry spokesperson said.

The Foreign Ministry has advised all Germans to leave Libya, where fighting is intensifying between those loyal to leader Muammar Qaddafi and anti-government forces pushing for him to give up power.

As more towns in the east come under opposition control and Qaddafi’s forces work to strengthen their control in the capital, desperate Libyans and frightened foreigners have been pouring out of the country by any means they can get.

There are an estimated 160 German nationals still in Libya, 50 of which are thought to be in the capital Tripoli.

Flag carrier Lufthansa announced on Thursday the cancellation of its daily flight to Libya until at least Monday due to the worsening security situation there.

Lufthansa normally flies to the capital Tripoli once a day from its hub in Frankfurt, but has brought “between 600 and 700 people” back to Germany in the past week using larger planes than usual, a spokesman for the company said.