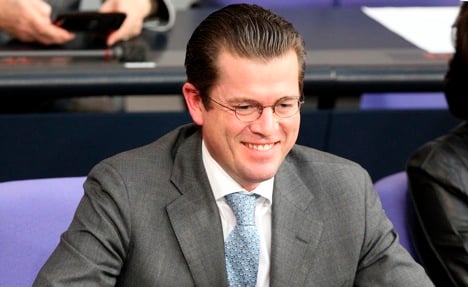 According to the survey, by the Infratest dimap polling institute for ARD television, 73 percent of people are happy with Guttenberg’s political work, compared to 68 percent before accusations he copied large chunks of this doctoral dissertation emerged.

A similar number (72 percent) said his decision to give up his doctorate title was sufficient to allow him to stay minister. Only 24 percent of those surveyed said he should step down.

The survey came as zu Guttenberg confessed to “serious mistakes” in his 2006 legal thesis amid rowdy scenes in the German parliament.

Although he had made errors, the minister stressed: “I have made clear in all my statements that I neither deliberately nor knowingly cheated.”

Internet sleuths have set up a collaborative website, or Wiki, to comb through the 475 pages of zu Guttenberg’s work, concluding there was evidence of unattributed copying on 270 of them. When the 14 pages of content and 65 pages of footnotes are taken into account, this amounts to more than two-thirds of the dissertation.

“I am a human being, who has weakness and who makes mistakes,” said the suave and popular 39-year-old aristocrat, who has been dubbed “Baron Cut-And-Paste” and “Zu Googleberg” by a the media.

In a letter to his alma mater, the University of Bayreuth, he asked to relinquish his doctoral title, saying there were “serious technical faults which contravened proper academic standards.”

Guttenberg received his wish on Wednesday evening, as the university committee investigating the allegations decided to strip him of his doctorate.

Chancellor Angela Merkel has thus far backed the minister, saying she appointed him as defence minister, not as an academic researcher. But opposition politicians in parliament on Wednesday accused him of lying and cheating and demanded he step down.

“You’ve lost your grip,” Thomas Oppermann, the parliamentary whip of the centre-left Social Democrats, told Guttenberg. “The chancellor has made a terrible mistake. You’ve sacrificed the truth for power, but you’ll not get away with this.”

Media commentators on Wednesday were divided on whether the minister should step down.

The leftist Tageszeitung wrote: “How can one go on believing such a man in the future, when he testifies on critical events, for example regarding the German army? This is where the chancellor comes in.”

“The fact that she is prepared to keep a liar in the cabinet in order to preserve her balance of power isn’t just unworthy of her office. It is a scandal,” added the paper.

The Berliner Zeitung, also on the left of the political spectrum, said: “Merkel has placed political opportunism above political decency and ethics.”

The right-wing sensationalist daily Bild, which has broadly backed him so far, withheld judgement, asking its readers on the front page to give their opinion.

But the centre-left Süddeutsche Zeitung, while saying zu Guttenberg should be “ashamed” of his actions, nevertheless said it could work in his favour.

him?” asked the respected daily.

“‘Look, says the baron to the people, I’m one of you. ‘A person who has weaknesses and who makes mistakes'”