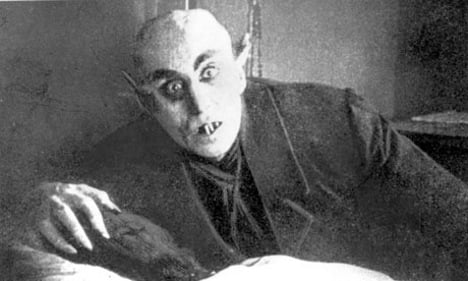 Long before “Twilight” and “True Blood” tried to make the undead sexy, Schreck set the foundation for pop culture vampires way back in 1922. It was then he played the creepy Count Orlok in F.W. Murnau’s film “Nosferatu” – now considered a horror classic.

Schreck would go on to star in a further 40 films, but the whereabouts of his final resting place were unknown for many years.

“Schreck’s grave was supposedly in Munich, where he died” some 75 years ago, said Stefan Eickoff, the author of biography about the actor.

Only by coincidence did a journalist researching Berlin’s cemeteries discover “Nosferatu” was actually buried just south of the German capital’s city limits.

The new memorial to the silver-screen ghoul is a 138 centimetre-high granite slab, bearing the simple inscription “Max Schreck, Actor,” along with the dates of his birth and death. A foundation for the German Film Museum covered the costs.