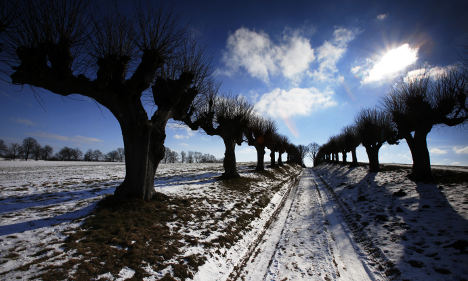 The high-pressure system “Heike” could be winter’s last gasp, as temperatures hit bitterly cold lows near -18.5 degrees Celsius in parts of the country earlier this week.

The clear, chilly weather will remain in most places until at least midweek, the German Weather Service (DWD) reported Tuesday. But cloud cover will form above the country soon, bringing milder temperatures.

“Cold winter air has really spread throughout Germany in recent days and still has us in its grips,” DWD meteorologist Peter Hartmann said in a statement. “But a change is in sight.”

While the clouds will eventually warm things up a bit, they are also likely to bring snow first.

On Wednesday, nighttime snow showers are expected from southern to central Germany, with up to five centimetres expected in low-lying areas in just a few hours.

“It would be advisable to plan a bit more time for the way to work on Thursday morning, particularly because these days train traffic isn’t always dependable,” Hartmann said, referring to a national train drivers’ strike.

More snow and rain are forecast to head east on Thursday, though parts of Bavaria, Saxony and Mecklenburg-Western Pomerania may remain dry.

On Friday, winter weather will cut a swath through the centre of the country from north to south, bringing more freezing rain and snowfall to higher altitudes.

The Alps in southern Germany will be particularly hard-hit by snow on both Thursday and Friday.

Meanwhile the northeast will likely be dry on Friday.

Over the weekend more stormy weather is expected, though with somewhat milder temperatures, the DWD forecast.

Still, “during spring one imagines something else,” Hartmann said.