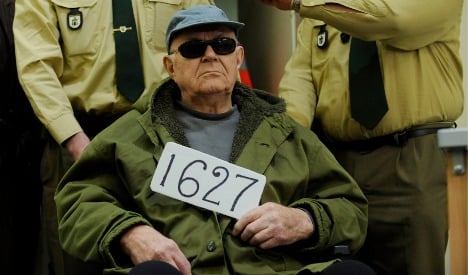 In a surprise development, his lawyer Ulrich Busch read out a rare statement from the accused, in which he dismissed the Munich court case as a “political show trial.”

“There is only one path open to me: to show the world what a mockery of justice this trial is,” said the statement.

“Unless the court does not accept the historical facts and does not…search for justice instead of carrying out a political show trial, I will begin a hunger strike within the next two weeks,” Demjanjuk added.

He called on the court to admit evidence that the defence says will cast doubt on allegations he was a guard at the Nazi death camp Sobibor between March and September 1943.

Prosecutors were due Tuesday to begin their closing arguments, but Busch entered a series of motions that delayed the trial.

The accused entered the court in a wheelchair, wearing his now trademark sunglasses and carrying a small sign showing the figure “1627”, the document number of the Soviet KGB files the defence says would clear him.

The court in the southern city of Munich could come to a verdict as early as March 22, although many observers expect a further delay. Demjanjuk, who denies the charges, faces 15 years behind bars if convicted.

The trial, which opened in November 2009 in a blaze of publicity, has since meandered slowly to a conclusion, with several delays due to Demjanjuk’s health and defence motions. There have been around 80 sessions since the trial opened.

Demjanjuk has been fighting to clear his name for decades.

He was previously found guilty in Israel of being “Ivan the Terrible,” a particularly sadistic death camp guard at another Nazi camp, Treblinka, but released after the Israeli Supreme Court decided they had the wrong man.