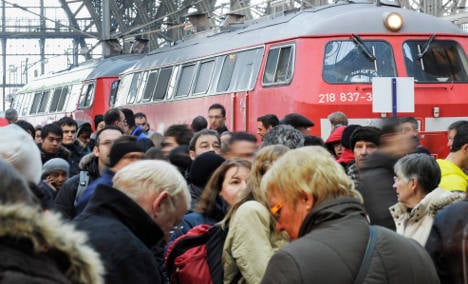 Regional and long-haul routes were also affected, with nationwide cancellations and late trains to be expected.

Though the strike was scheduled for between just 6 am and 8 am, passengers were warned that rail traffic was unlikely to return to normal until evening.

Meanwhile Deutsche Bahn called on hundreds of additional workers to inform customers at train stations. The company also urged people to go online or call 08000 99 66 33 to find out more about how their region is coping with the strikes.

Any passengers forced to find other means of transportation can have their train ticket refunded at Deutsche Bahn service centre or take the next available train at no extra charge, the company said.

The GDL union has demanded wage increases for some 26,000 regional, long-haul and freight train drivers. They are hoping to get 105 percent of the current average wage at Deutsche Bahn.

The union threatened to shut down the nation’s railways if Deutsche Bahn and six other private train services failed to present an acceptable wage offer.

“Both Deutsche Bahn and (other rail operators) had enough time to offer us a negotiable offer in oder to avoid a labour dispute,” said GDL boss Claus Weselsky on Monday evening in a statement. “They didn’t make use of it.”