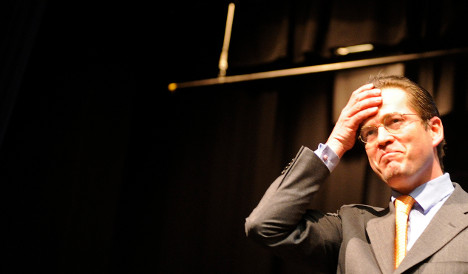 The conservative Christian Democrat had already temporarily given up his doctorate title while his alma mater the University of Bayreuth looked into the claims that he plagiarized several passages of his 2006 dissertation.

But in a letter sent late Monday, the minister said a close inspection of his thesis showed “serious errors… which are not compatible with scientific work,” university spokesman Frank Schmalzle said.

In his first public speech since the scandal emerged, Guttenberg told a crowd of CDU supporters in Kelkheim, Hesse on Monday night that the decision to give up the title was painful, particularly after investing seven years of work in the endeavour.

After reviewing the dissertation, Guttenberg said he realized he had “lost sight of the sources here and there.”

He also apologized to anyone who had been hurt through his mistakes, particularly his thesis advisor.

“I also stand by the rubbish that I wrote,” he added, saying he had not intentionally copied the work of others.

Internet sleuths have set up a collaborative website, or Wiki, to comb through the 475 pages of Guttenberg’s work, concluding there was evidence of unattributed copying on 270 of them.

When the 14 pages of content and 65 pages of footnotes are taken into account, this amounts to a large chunk of the dissertation.

The suave and popular 39-year-old, dubbed “Baron Cut-And-Paste” and “Zu Googleberg” by the German media, acknowledged on Friday that there were “mistakes” in his thesis but denied plagiarism.