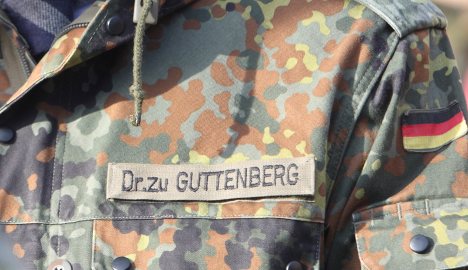 Internet sleuths have set up a collaborative website, or Wiki, to comb through the 475 pages of zu Guttenberg’s 2006 work and say there is evidence of unattributed copying on 270 of them.

When the 14 pages of contents and 65 pages of footnotes are taken into account, this represents a sizable part of the dissertation.

The suave and aristocratic 39-year-old on Friday temporarily gave up the right to call himself “doctor,” pending an investigation into the claims by his alma mater, the University of Bayreuth.

He acknowledged there were mistakes in the work but denied plagiarism.

Nevertheless, the scandal is causing increasing damage to the star minister, who is a close ally of Chancellor Angela Merkel and whom polls frequently show is Germany’s most popular politician.

There was some speculation in the press Monday that he was considering stepping down but an Emnid poll seemed to give him some support, with only 27 percent saying they wanted him to resign.

“Guttenberg is no longer skating on thin ice. The ice has already cracked,” the Süddeutsche Zeitung wrote.

But the minister, dubbed “Baron Cut-And-Paste” and “Zu Googleberg” by a gleeful press, has won backing both from Merkel and Horst Seehofer, the head of his conservative CSU party.

“The defence minister has my complete trust,” Merkel said in Berlin on Monday. “I didn’t appoint a scientific assistant or someone with a doctoral dissertation. This is about the job of defence minister, which he carries out extremely well, and for me that’s what counts.”

Support also came in the shape of a front-page editorial in respected business daily Handelsblatt.

“Guttenberg represents the hope that Germany can move into the future … the task that awaits the young politician is greater than the mistake he has made. He still has things to learn, including humility.

“But he should learn these things still in office. A weakened Guttenberg is better than no Guttenberg,” the paper wrote.