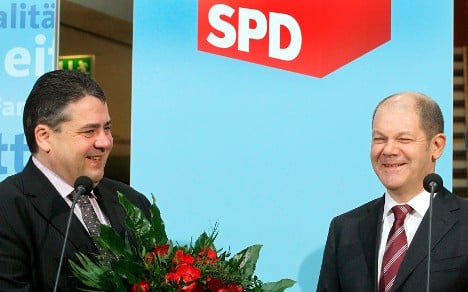 Sunday’s vote in Hamburg, Germany’s second-largest city, saw Angela Merkel’s centre-right Christian Democrats (CDU) crash to just 21.9 percent, less than half their score from the last election in 2008, ending a decade in power there.

The centre-left Social Democrats (SPD) triumphed with 48.3 percent of the vote in the northern city-state, returning them to office in a city that until the CDU’s 2001 victory had been a left-wing bastion.

The result will constrict the ability of Merkel’s centre-right coalition at the federal level to push legislation through the upper house of parliament, the Bundesrat, which represents Germany’s 16 states.

While the Social Democrats are hoping the Hamburg election will provide momentum for six other state polls to be held this year, some observers are wary of interpreting too much national import from it. To be sure, wresting Baden-Württemberg from six decades of Christian Democratic control next month will prove much more difficult for the SPD.

“Are the Social Democrats on the verge of a glorious comeback while the Christian Democrats faces a series of disasters?” asked the Stuttgarter Zeitung rhetorically. “The situation is hardly that clear-cut.”

The paper, based in the capital of Baden-Württemberg, pointed out that nationally the SPD continues to wallow in opinion polls while Merkel’s conservatives have actually improved their standing lately. Olaf Scholz, Hamburg’s mayor-elect, found the right formula for Hamburg, but that did not ensure success for the Social Democrats elsewhere, according to the regional daily. “Regardless of this, the result in Hamburg will cause a few ripples nationally,” the paper wrote.

The conservative Frankfurter Allgemeine Zeitung said Merkel’s Christian Democrats now had to face the prospect of losing the political middle ground across the country after the failure of Hamburg’s trailblazing alliance between the CDU and Greens known as a “black-green” coalition.

“Since Sunday the CDU in Hamburg is what it was for decades: a party out of power and without prospects – and that’s also true far beyond Hamburg,” the paper wrote. “It’s not only the collapse of the first black-green state government, but also the first proper attempt to make a CDU allied with the Greens more attractive to younger and urban voters.”

The centrist daily Der Tagesspiegel also said the Hamburg election could end up being more portentous than many German politicians had ever imagined.

“It’s not just the result that counts. It’s the message: the yearning for dependability,” the paper opined, pointing to the example of the SPD centrist Scholz. “This is not simply an abstruse northern German desire. Many people have the feeling the national politicians are failing to provide it, as evidenced by the wrangling over reforming Hartz IV welfare benefits and the eternal debate about promised tax cuts.”

Der Tagesspiegel said the Hamburg vote posed pitfalls both for the SPD and the CDU. While SPD Chairman Sigmar Gabriel now faced pressure to follow Scholz’s example and position his party in the centre, the CDU’s failed political marriage with the Greens meant the conservatives were effectively abandoning Germany’s big cities to other parties.

“Hamburg, Berlin, Munich, Cologne – the CDU fails to poll over 25 percent in all of Germany’s cities with more than a million people,” the paper pointed out. “In other big cities the situation isn’t much better. Everywhere voters seem to miss consistency and dependability – exactly those attributes that make a party attractive to the tolerant, cultured and socially conservative working middle class.”

The left-wing daily Die Tageszeitung concurred that the Hamburg SPD’s moderate course had national implications for the party – but not necessarily for the better.

“Scholz put the party back on the right path, according to the SPD. Being pragmatic, centrist, humble and reliable – that’s how the SPD can win once again,” the paper wrote. “But that’s only half the truth. This victory never would have happened had not the Hamburg CDU self-destructed. Hamburg cannot simply be extrapolated nationwide.”

The paper also noted the SPD was still suffering from the last time the Social Democrats lurched to right under former Chancellor Gerhard Schröder.

“Olaf Scholz is supposed now the second-most powerful man in the SPD. But it’s unclear if that’s really good news for the SPD.”