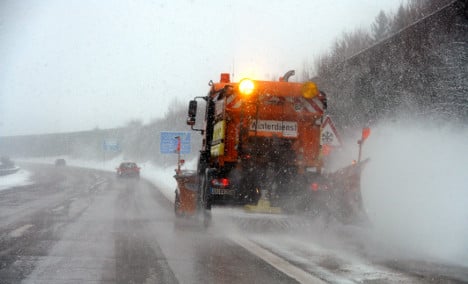 In the western state of Rhineland-Palatinate, a man was died in a weather-related pileup on the A6 motorway near Kaiserslautern, forcing police to close the road in one direction.

Police in the state of Baden-Wurttemberg’s Swabia region reported more than 50 accidents between 10 pm and 8 am.

In Lindau county one woman lost control of her vehicle, rolling her car off the road and sustaining severe injuries.

Along the A8 near Rutesheim, a tanker truck overturned, spilling about 10,000 litres of heating oil n the street. It was closed headed towards Stuttgart for several hours, creating a 20-kilometre traffic jam.

In Upper Bavaria, another 40 accidents occurred between just 5 am and 8 am, police there said. Three people were injured.

The A96 motorway in Bavaria was shut down near Jengen overnight due to truck accidents that injured three, police reported.

In one particularly dramatic crash, a truck attempting to pass slower car spun out of control, slamming into the median guardrail and back onto the snow road, where it smashed into the car. Both vehicles were heavily damaged.

The Portuguese truck driver had to be freed from the crushed cab of his vehicle and sustained serious injuries, while the Italian driver of the car was hospitalised with minor injuries, authorities said.