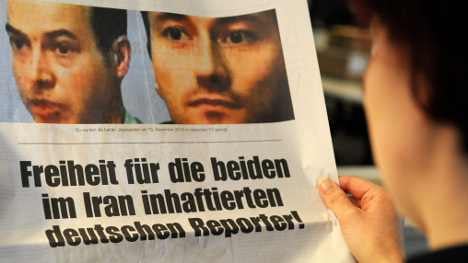 A newspaper advert calling for the reporters' release. Photo: DPA

Marcus Hellwig and Jens Koch, a reporter and a photographer with the Bild am Sonntag newspaper, were arrested on October 10 as they tried to interview the son of Sakine Mohammedi Ashtiani, the woman who had been sentenced to death by stoning for adultery.

The journalists were initially sentenced to 20 months in prison for breaking the terms of their visas but have now reportedly been fined 500 million rials each – about €35,700 – and are allowed to leave the country.

“The two German nationals are currently in Tabriz, accompanied by German consular staff,” a ministry spokesman said. “We hope to get them into the care of the German embassy in Tehran today.”

Once they reach Tehran, they are expected to leave return to Germany on the earliest flights possible.

The journalists’ families and their newspaper have made a huge effort to secure their release, appealing to Iranian authorities for clemency, particularly in light of the Iranian New Year festival Nowruz, a March celebration during which prisoners are often released.

High-level diplomatic efforts were also been made, including Germany calling Iran’s ambassador to the Foreign Ministry to explain his government’s actions.

While Hellwig and Koch will soon be on their way home, the story of the woman they were trying to report on has a less felicitous ending. She will no longer be stoned to death, but instead faces hanging for being an accessory to the murder of her husband.