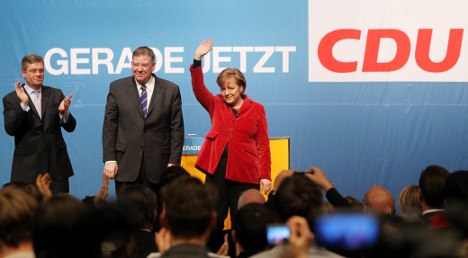 Opinion polls put support for the centre-left Social Democrats (SPD) in the northern German port city at double that of the CDU, meaning its decade in power will almost certainly come to an end.

With local issues strongly at play, analysts stress that the SPD is most definitely not twice as popular as the CDU throughout Germany. In fact the CDU is well ahead of the SPD in national surveys.

“Voters are motivated more by local concerns rather than what Merkel’s government has done,” insists CDU Mayor Christoph Ahlhaus, who only replaced Ole von Beust in August.

But the opposition, with the SPD returning to power in a city-state where they ruled the roost for 40 years before 2001, are hoping that the result will set the tone for what could be a rough year for the 56-year-old Merkel.

In particular they have their eye on the year’s most crucial election in the wealthy southern state of Baden-Württemberg on March 27, where Merkel’s party risks losing power after 58 years in charge.

Voters in SPD-controlled Rhineland-Palatinate also go to the polls on March 27, while other elections include Bremen in May and the capital Berlin in September.

“For the CDU, Baden-Wuerttemberg is much more important (than Hamburg),” Michael Greven, political scientist at Hamburg University, told news agency AFP. “If they lose that state election, it will have repercussions at the federal level.”

Merkel won a second term in office in September 2009, replacing the SPD as her partners for what was billed as a “dream coalition” with the pro-business Free Democrats (FDP).

Its first year in office resembled more closely a nightmare, however, with the FDP squabbling with the CDU and its Bavarian sister party the CSU and Merkel feeling the heat from voters for her handling of the euro crisis.

In May an election defeat in North Rhine-Westphalia, Germany’s most populous state, cost the governing coalition its majority in the upper house of parliament, the Bundesrat, making it more difficult for Merkel to push through her political agenda.

The CDU’s poll ratings nationally have picked up slightly from their lows last summer, but the FDP remains stuck at around the five-percent level needed to enter parliament.

In Hamburg, the FDP risks failing to win any seats in the state legislature.

All eyes will also be on the Greens as the ecologist party attempts to capitalise on its strong poll ratings in recent months, helped by their opposition to plans to extend the lifetime of nuclear power plants.

They also have high hopes for Baden-Württemberg, where they have been boosted by a row over a new train station in the state capital Stuttgart, as well as for Berlin in September.