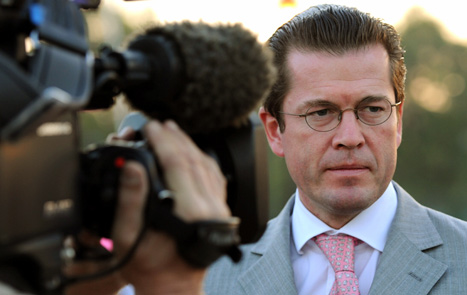 Speaking to reporters in Berlin, the conservative politician said he was “extremely sorry” for failing to properly cite copied sections of his thesis, but denied being wilfully deceitful.

“My dissertation is not plagiarized,” he said, explaining he wrote it over seven years while juggling the demands of being a politician and a young father.

But he admitted the work on constitutional law “unquestionably contains mistakes.”

Guttenberg said he would not call himself a doctor until the accusations of plagiarism had been cleared up.

“I do not want myself to be subject to different standards than anyone else,” said the 39-year-old, who has been mentioned as a possible future chancellor after high-profile stints as minister of economy and defence.

But the opposition centre-left Social Democrats said if the allegations prove true, Guttenberg should step down.

“If his doctoral degree is revoked, he should leave office,” said Dieter Wiefelspütz, the domestic affairs expert of the Social Democratic Party’s parliamentary group. “With a stain like that, he can’t remain minister. That would apply to anyone else.”

On Wednesday, Guttenberg was accused of plagiarizing portions of his doctoral dissertation at the University of Bayreuth. The number of authors that the popular politician and member of the Christian Social Union allegedly copied from has risen to 15. The university has demanded that Guttenberg respond to the allegations within two weeks.

On Thursday night, Guttenberg met Chancellor Angela Merkel, who according to German public television, demanded an explanation of the matter. Guttenberg also cancelled a scheduled appearance at a campaign event in the state of Saxony-Anhalt.

But the minister did receive backing from conservative cabinet colleagues. Education Minister Annette Schavan from the Christian Democrats warned about reaching a hasty judgement.

“I think that even ministers have the right not to be prejudged,” she said in the Friday edition of the Rheinische Post, adding that the public should wait until the accusations have been fully investigated.

“Anyone can make a mistake,” he said on Friday in an interview with German public radio.

When asked if Guttenberg should resign, Schäuble said after a short pause that the defence minister was a strong politician from the younger generation.

“We have to wait and see what the facts tell us,” he said.

But the scandal appeared unlikely to die down soon, with Thomas Janovsky, a spokesman for prosecutors in Bayreuth, saying on Friday that two criminal complaints had been lodged against Guttenberg.

And the minister will be bracing for more bad press on Saturday after he outraged the German media corps by giving his statement only to selected reporters.

This prompted several dozen journalists to walk out in protest of a regular government news conference given by Merkel’s spokesman.