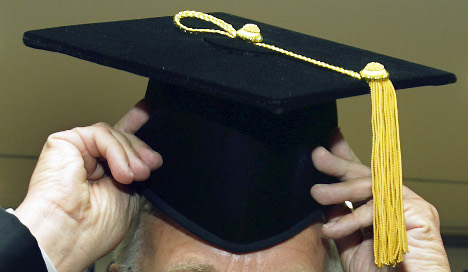 On Wednesday, daily Süddeutsche Zeitung published excerpts of Guttenberg’s PhD thesis along with sections of other texts that matched almost exactly. The Bremen professor who discovered the similarities accused the conservative politician of “brazen plagiarism” and willful deception.

While Guttenberg has denied any wrongdoing, an ombudsman at his alma mater, the University of Bayreuth, is looking into the claims.

Professor for Media and Computing at Berlin’s University of Applied Sciences, Debora Weber-Wulff, is among Germany’s top experts on plagiarism in academia. She told The Local the that true aim of education is sometimes lost amid a rapacity for title-associated prestige and an unclear definition of plagiarism.

What is your assessment of the Guttenberg situation?

The excerpts that the Süddeutsche Zeitung has online are scary, because they are one-to-one copies. And that’s not OK.

What the rest of the thesis is like, and which chapter the alleged plagiarism is in – that’s another question. There are communities here who say it’s OK to plagiarize a little in your methodology section, but not in others. I think this is completely bizarre. Germans have a way of talking the problem down.

Should Guttenberg’s doctorate be rescinded?

At every university there is an ombudsman for good scientific practices, and they are charged with investigating any allegations of plagiarism. That’s what needs to happen in Bayreuth. I’m trying to get the press to calm down, which is not easy. Guttenberg has been in the news for all kinds of stuff lately, so everyone is out to get him, and they want a quick judgement. But plagiarism is a scientific thing, and nothing to do with him as the minister of defence.

What is the real issue then?

This has to do with the German tendency to love titles, they are title-fixated, and people in politics love to have a doctor title so they seem wiser. But it should be about science, for scientists to prove that they can work by themselves – it’s the first proof that they can do research on their own.

Would you say there is a culture of plagiarising and cheating among German students?

I wouldn’t go that far. There’s a download culture. Young people download their music, videos, and why not download their thesis, because they just see it as busy work – something that stands between them and the degree they think they want or need so they can make lots of money and don’t have to work any longer.

Do they understand that it’s wrong?

In recent case studies we’ve noticed students saying, ‘Yeah? What’s the problem?’ They’re missing out on the point of education. They just think they have to have a degree, and Germany is so completely focussed on this. People don’t care if they have the associated skills, they just have to have the degree. This is a very German problem, because in the US, for example, if you have the skills and no degree, it’s fine. But in Germany you must have that piece of paper. People just go through the motions to get it.

How are professors dealing with the problem?

For a long time many were just putting their heads in the sand. Then they panicked and went out to buy software. That’s when I developed a process for determining whether the software actually worked through test cases.

What are the rules for defining plagiarism in Germany?

The US is further along than Germany on this one, because the Modern Language Association has clear-cut rules that define plagiarism. Germany still doesn’t really know. There’s no definition in academia. There’s an idea that it’s just the copying and pasting, but it varies from field to field.

The grey area is that you have to look at it in context – and it’s not just copy and pasting. It can also be taking ideas without sourcing, paraphrasing, and representing others’ ideas as your own.

How thorough are reviews of doctoral theses, then?

You have to look really closely. I sat on the review committee for one that was a plagiarism from start to finish, and the doctorate was not granted. I’ve also been involved in a case in 2004 where a doctorate was rescinded, and that was a very clear-cut case. But of course the guy just went to another university and did a doctorate there. And they didn’t have a problem with that.

How many doctorates are not granted or rescinded because of plagiarism?

Nobody has statistics on that and people have a tendency to sweep this issue under the rug. German professors have a tendency to want to be the top dog, and they don’t like to credit other colleagues, and that contributes to the problem. It’s an ego trip. And with doctoral candidates it’s the same, they just want the title so they can put it on their mailboxes and their little bronze door plates.

Professor of Media and Computing at Berlin’s University of Applied Sciences (HTW), Debora Weber-Wulff, is among the country’s top researchers on plagiarism. She gives seminars for academics on the topic, in addition to blogging and running a plagiarism portal through the HTW. Born in the United States, she came to Germany at age 19 and has been a professor here since 1993.