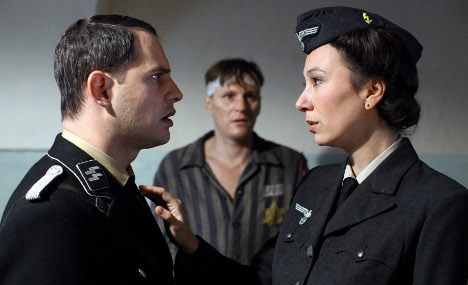 “My Best Enemy” stars one of Germany’s most popular actors, Moritz Bleibtreu, in a comedy that takes daring risks with its harrowing subject but was applauded at a packed press screening.

Director Wolfgang Murnberger, 50, said he was aware of walking a thin line with his take on the horrors of the Nazi era but said he believed audiences were ready for a new approach.

“I had thought that this material could only be dealt with like in ‘Schindler’s List’ in a feature film because that is politically correct,” he told reporters, referring to Steven Spielberg’s harrowing Oscar winner.

“But then I saw that you could do more than show Jews behind barbed wire and in concentration camp uniforms — the idea was that in a story like this one, the Jew can be the hero.”

Bleibtreu plays Victor Kaufmann, the scion of wealthy Viennese gallery owners who still believe they can use their influence to escape the Nazi killing machine.

But a childhood friend, Rudi Smekal, who grew up in the Kaufmann family villa while his mother worked there as a housekeeper, sees his chance in the rise of the Third Reich.

He joins the SS and sells the family out by promising to deliver a priceless Michelangelo drawing in Kaufmann’s possession, which Axis partner Italy is demanding.

The Nazis seize the sketch and deport the family but when the time comes for the handover to the Italians, an expert determines the confiscated piece is a forgery.

to reveal the location of the original. But their plane crashes over Poland and in the ensuing confusion, Kaufmann tricks Smekal into giving him his uniform.

When German troops arrive, Kaufmann begins a dangerous game in which he has to play the part of a Nazi to save his own life and that of his mother.

The ensuing race to find the Michelangelo drawing and organise an escape veers into slapstick when Kaufmann must perform crisp “Sieg Heil” salutes and cut a dashing figure in his Nazi uniform to hide his true identity.

A happy ending sees Kaufmann vindicated, with Smekal getting his comeuppance, while the real Michelangelo turns up in a surprising location.

“It was difficult to maintain this balance between a comedy and a tragedy. I wanted to show glimpses of the real story – for example prisoners in a concentration camp– as the backdrop for a fictional story,” Murnberger said.

“I am an Austrian director – maybe that is why I dared to make this movie. I’m curious to see how it will be received in Germany.”

A lighter approach to the Nazi period in German cinema has proved a dicey prospect in the past.

However Italian comedian Robert Benini’s 1997 “Life is Beautiful” set during the Holocaust won three Academy Awards and was an international box office smash.

“My Best Enemy” is screening out of competition at the Berlin film festival, which wraps up on Sunday.