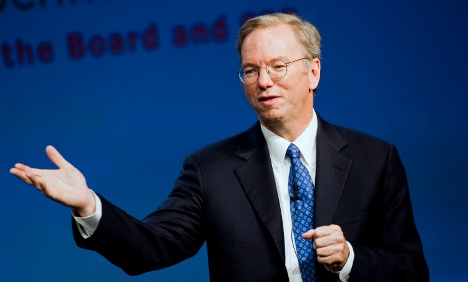 “We won’t just massively expand our German team in the areas of marketing and engineering, we’ll also make a substantial financial investment to build a new institute for internet and society in Berlin,” outgoing Google CEO Eric Schmidt wrote in daily Die Welt on Wednesday.

Schmidt said two things stand out to him when he considers the world economy – the flourishing internet and the way Germany’s thriving industry overcame the global recession.

That sector’s long-term investment in the future, along with Germany’s top-notch educational standards, are an example to other economies based on more immediate gains, he wrote.

“We believe this country will lead the future in ideas, innovation and long-term strategic thinking,” he added.

The new institute will work with “leading academic institutions” to research internet-related trailblazing, political frameworks and their related legal facets.

“Germany has played a pioneering role in so many branches,” Schmidt wrote. “This suggests that it can also take on such a role in the internet.”

Google has not always had an easy time operating in Germany, which has notoriously tough data protection laws, so the new institute could be an attempt to win over German hearts and minds.

Besides regularly clashing with the country’s officials on privacy issues, Google has also had difficulty winning over the sceptical public. Hundreds of thousands of Germans opted out of Google’s Street View online mapping service, demanding their residences be made unrecognizable on the internet.

Officials have also threatened to fine companies who use the company’s online metrics service Google Analytics.

Schmidt acknowledged this tension in his article, saying that data protection was a topic “near to my heart.”

His statements followed his late-January announcement that the US company would invest heavily in its German operations this year, creating hundreds of new jobs.

Last month the 55-year-old Schmidt also made the surprise announcement he would step down as CEO in order to head Google supervisory board. He will be replaced by his predecessor – Google founder Larry Page.