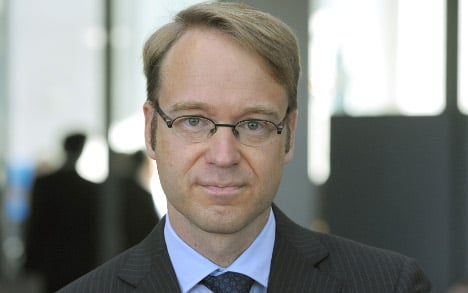 “Anyone who knows Jens Weidmann knows that he has excellent professional

competence, a brilliant intellect and that he is of an independent mind,” Merkel told reporters.

Merkel said Weidmann will take up his new position at the helm of the Bundesbank on May 1. She also appointed Sabine Lautenschlaeger-Peiter as vice president of the central bank.

While the 42-year-old Weidmann fills an important vacancy in Frankfurt, the German government now has no real candidate to propose as next head of the European Central Bank to replace Frenchman Jean-Claude Trichet in October following Weber’s shock departure.

But Foreign Minister and vice-chancellor Guido Westerwelle said Germany had not “given up on its ambitions for the ECB. We want to contribute to a German culture of stability in Europe.”

Weber was the frontrunner for the ECB post and his resignation opened the field up to several others interested in running the world’s second most powerful central bank after the US Federal Reserve.

“I think this means that we will no longer have a German ECB president. I think

Weidmann will assume Weber’s seat on the ECB governing council as head of the Bundesbank.

At the Bundesbank, Weidmann will have to demonstrate he is his own man and

not beholden to Chancellor Angela Merkel, for whom he became an important

influence over over the past four years.

Some politicians were also uneasy, with a leader of the opposition Social Democratic Party saying before the appointment that it would “undermine confidence in the Bundesbank’s independence.”

That is an extremely important quality of the central bank in the eyes of most Germans who have not forgotten bitter lessons brought on by hyper-inflation in the 1920s.

“Can a man who has executed the wishes of the chancellor for five years put up a credible fight against inflation and attempts to influence the European Central Bank, even against his own government,” the Financial Times Deutschland said in discussing the expected appointment earlier.

Even members of the pro-market Free Democratic Party (FDP), Merkel’s coalition partners, found the nomination “problematic,” according to its expert on financial affairs, Frank Schaeffler.

Such a nomination is not without precedent however. One of the most respected Bundesbank presidents, Hans Tietmeyer, was a junior finance minister and an advisor to former chancellor Helmut Kohl.

While he was the central bank chief, Tietmeyer orchestrated the euro’s introduction in Germany.