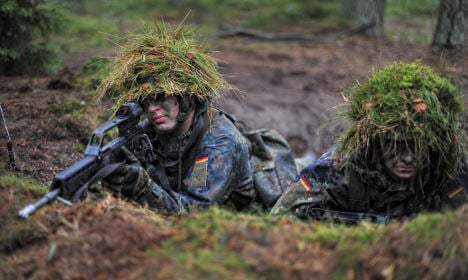 The Bundeswehr is hoping to make military service more attractive to less educated and unskilled Germans as it transitions to a fully professional force, daily Financial Times Deutschland reported.

“In light of the demographic developments as well as the ongoing structural adjustments to the Bundeswehr, young people with below-average education and school dropouts will now be approached for recruiting,” the document acquired by the paper reads.

This “opening of new potential for gaining personnel” will be necessary to maintain the necessary troop numbers, it says, calling the plan an “Attractiveness Programme.”

These recruits would be targeted to fill mainly lower-ranking military positions, the paper said.

The latest detail in military reform plans by the Defence Ministry came after this weekend’s news that foreigners living in Germany could be allowed to join the Bundeswehr.

But a Defence Ministry spokesperson told the Financial Times Deutschland on Tuesday that only EU citizens and those from a few other countries would be among those considered for enlistment.

Other ideas revealed over the weekend included plans to make the Bundeswehr more family-friendly for soldiers, with the provision of parent-child work rooms in around 200 bases, as well as holiday care for children to be provided at 100 bases.

The top age limit for reserve soldiers would also be scrapped, with the maximum time for soldiers to remain in the military raised from 20 to 25 years.