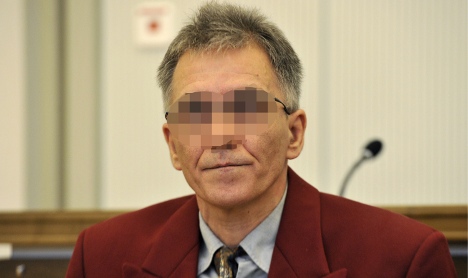 The 48-year-old, identified only as Detlef S., is accused of forcing his stepdaughter, now in her late 20s, to father eight of his children and of sexually abusing his daughter and stepson in a 23-year reign of terror in the village of Fluterschen in Rhineland-Palatinate.

Dressed a red jacket, blue shirt and colourful tie, Detlef S. showed no emotion as the charges were read out and did not speak.

But his lawyer, Thomas Dueber, told the court: “He would like to clarify that he is the father of the seven children of the co-plaintiff (his stepdaughter). But he denies the charges made against him.”

Paternity tests have already proven with near 100-percent certainty that the unremarkable man with glasses and greying, receding hair, was the father of the seven children. An eighth child died shortly after birth and was not examined.

The Bild daily dubbed the trial in Koblenz, western Germany, the trial of “the German Fritzl” after Austrian Josef Fritzl, who held his daughter Elisabeth as a sex slave in a cramped dungeon for 24 years.

Fritzl raped Elisabeth thousands of times, fathering seven children with her and letting one of the newborn babies die. He was sentenced to life in prison in March 2009.

In total Detlef S. is charged with 350 counts of sexual assault and grievous sexual assault of minors. He is also accused of prostituting the stepdaughter and his biological daughter out to others, allegedly while he watched.

A verdict is expected on February 25.

Midwife Gabriele Schulte, who delivered three of the children, said that she and a doctor had become suspicious and had alerted social services, but that it came to nothing.

“They went over there to see what was what. But since the children showed no signs of being neglected or even abused, and as the daughter said nothing, they had to leave,” Schulte told the regional Rhein-Zeitung newspaper.

She said that the accused was present at all the births, and that he always seemed very self-assured.

“He didn’t seem to be afraid they might start talking. And he definitely didn’t have a bad conscience,” she said.

The stepson told N-TV rolling news channel: “Of course we are scared of the trial, but I hope we will have the strength to come through it.”

Asked what he hoped for from the case, he replied: “That he (the accused) is never free again. That he is never able to hurt people in the way he hurt us.”

Speaking earlier to Bild, he also gave a harrowing account of one typical

“Detlef was drunk. He went upstairs. Suddenly we heard screaming. We saw Detlef trying to drag my sister into the bedroom. My mother started shouting at him and he beat her up so badly that she lost consciousness.”

“We went to the police and to social services but never heard anything back from them. Five days later I moved out of the house.”

One of the man’s neighbours told the Rhein-Zeitung: “We often wondered about the several children in his house. Especially because they looked so much like him.”

The man was arrested on August 10, 2010 and has been in custody since.

The mother, who is in her 50s, is expected to appear as a witness in the trial and prosecutors are not charging her with any offence, lawyer Katharina Hellwig said last week.

“It looks as if she repressed what went on,” Hellwig said.

The trial was suspended immediately after the charge sheet was read out. The accused was not expected to speak during the trial, but his lawyer indicated he might read out a statement on his behalf.

In line with German privacy laws, the defendant’s full name was not given in court.